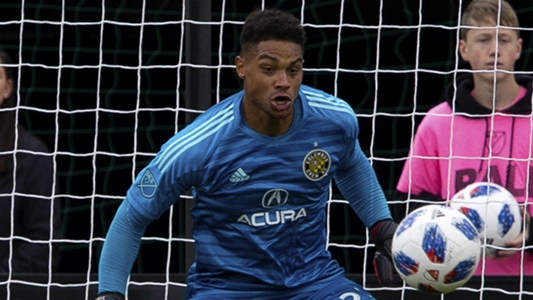 U.S. national team and Columbus Crew goalkeeper Zack Steffen has finalized his transfer to Manchester City after completing his medical and signing his new contract on Thursday, multiple sources have confirmed to Goal.

The 23-year-old goalkeeper will join the Premier League champions for a transfer fee of $7.5 milion (£6m)  that could rise to $10m if Steffen reaches certain incentives.

With Steffen unlikely to succeed in his quest to secure a UK work permit, the American goalkeeper is expected to be sent out on loan, with French club OGC Nice, which is coached by former New York City FC boss Patrick Vieira, a potential destination.

Steffen’s transfer is one of the largest ever paid for an MLS player, and has shattered the previous record for an MLS goalkeeper, which was the $3 million Manchester United paid for Tim Howard in 2003.

The 2018 MLS goalkeeper of the year, Steffen enjoyed a breakout year for club and country, emerging as the first-choice goalkeeper with the USMNT, and turning in several standout performances, including a strong showing in the national team’s 1-1 draw with France prior to the World Cup.

Though Steffen does not currently qualify for a UK work permit, he could re-apply in the summer, and may stand a better chance to secure one if he can maintain his hold on the starting USMNT job in this summer’s Gold Cup.

With his former Columbus Crew coach, Gregg Berhalter, having been hired as the new U.S. national team coach, Steffen stands a good chance of holding on to the job, though he is facing good competition from Club Brugge goalkeeper Ethan Horvath.

Steffen’s transfer to Manchester City comes four years after he left the University of Maryland as a 19-year-old to join German club SC Freiburg. He endured an unhappy stint at Freiburg, leaving the German club after a year and a half to sign with the Crew.

Steffen is seen as a potential long-term option for Manchester City, which currently boasts Brazilian national team goalkeeper Ederson as its starter. Steffen’s passing ability and ball-handling skills, as well as his experience playing in a possession-based system with the Crew, should help him adapt to Manchester City’s playing style and challenge for playing time once he is able to secure a work permit and join the first team.