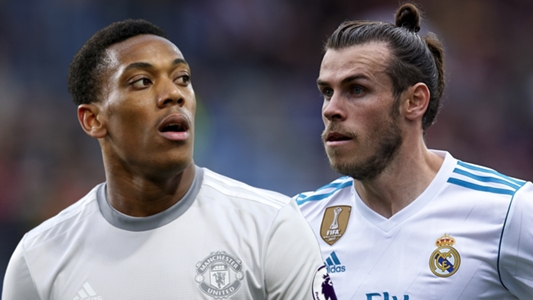 Jose Mourinho has run out of patience with the 22-year-old forward and is ready to cash in at the end of the season, with Juventus leading the chase.

The profits will then be used on an attempt to land Bale from Madrid, a player the club has been chasing for years.

Madrid trying to bring back Morata

Real Madrid are looking to bring Alvaro Morata back to the club after the forward was sold to Chelsea, The Sunday Express reports.

Bayern Munich are also keen on the Spaniard, who has had fitness and form issues since joining the Blues last summer.

Antoine Griezmann has turned his back on a potential move to Manchester United and has agreed an £88 million switch to Barcelona, The Sun  claims.

Jose Mourinho had the French striker as a top target in his attempt to turn the Old Trafford outfit into Premier League title contenders.

But the Atletico Madrid hit-man has decided to stay in Spain and join up with Lionel Messi, rather than teaming up with international team-mate Paul Pogba.

Madrid and Barca cool on Salah

The 25-year-old was widely tipped to be going to La Liga with a £200 million price tag, but Barcelona are looking to bring in Antoine Griezmann and will not have the money to sign the Egyptian.

Real Madrid have also reportedly decided against bringing in Salah as they try to rebuild their attack.

Barcelona are looking at Atletico Madrid’s Lucas Hernandez as an option to strengthen their defence this summer, Don Balon reports.

The French defender is seen as a good fit at centre-back for the Catalan club and is interested in making a move.

The Blues are planning a £30 million move for the 24-year-old centre-back this summer.

Arsenal in for Matthijs de Ligt

Arsenal are looking to bring in rising Ajax star Matthijs de Ligt as they attempt to rebuild their defense, according to The Mirror.

At just 18, the Dutch defender is being watched by Gunners’ scouts, though with several top clubs interested there is concern at Arsenal that he may now be overvalued.

Shinji Kagawa’s future will be in Turkey, with the Borussia Dortmund star to sign with Galatasaray, according to Turkish outlet Star (via Sport).

The Turkish club are looking to open up new markets and see adding the Japanese star as a perfect move to allow them more exposure in Asia, while also improving their squad.

Arsenal are winning the race to sign young German Kai Havertz, according to 90min .

The Bayer Leverkusen youngster is also being chased by Liverpool and Manchester United, but the London outfit are now favourites to land his signature.

Conte in the dark over future

Antonio Conte is unsure if he will still be Chelsea manager next season, saying his future is “a problem for the club” to make a decision on.

Read the full story on Goal

The Portugal international is keen to end his career at the club that made him a star, but he has also told Real of United’s interest, and is keen to increase his salary yet again.

Real, however, are interested in both Neymar and Eden Hazard ahead of the summer, and United may offer Ronaldo the pay rise he desires as they look to secure another ‘Galactico’.

Thomas Tuchel is out of the running to take over as Bayern Munich coach next season because he has already agreed to join another club, Karl-Heinz Rummenigge says.

The Bundesliga side held talks with ex-Borussia Dortmund boss Tuchel over replacing Jupp Heynckes next term, but will have to look elsewhere as they aim to name their next coach within the next month.

“Our sporting director, Hasan Salihamidzic, has held talks with coaches – that’s his job – and among them was Tuchel,” Rummenigge said. “Last Friday, Thomas Tuchel told us that he’s signed with another club. One has to accept that, but it’s not a problem for us.”

Read the full story with Goal