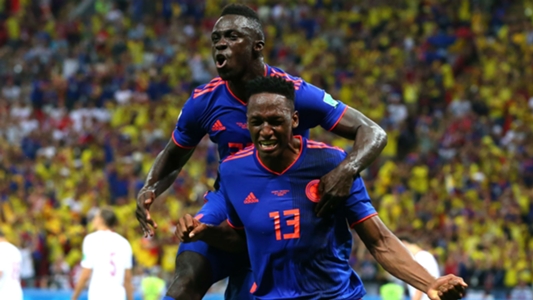 Barcelona are willing to listen to offers for Yerry Mina as they look to move the centre-back on just six months after signing him, even though the player says he never wants to leave.

The 23-year-old Colombia international joined the Catalan side from Palmeiras in January and made just five La Liga appearances as they finished the season as domestic champions.

But the defender, who scored the opening goal in Colombia’s 3-0 win over Poland in the World Cup on Sunday, will not be given a place in the squad next season, as he is not part of Ernesto Valverde’s plan.

Barca are expected to complete the signing of Clement Grenier from Sevilla to provide extra cover in defence for Samuel Umtiti and Gerard Pique, while the imminent arrival of Arthur Melo from Gremio means there is one more non-EU player position taken up.

Barca will try to engineer a permanent move for the centre-back, but are open to an initial loan deal, with Borussia Dortmund and Turkish side Fenerbahce credited with an interest.

The centre-back himself, however, feels he has the support of the club does not want to leave Camp Nou just a few months into his five-and-a-half year contract.

“For me, Barcelona are the best team in the world. I don’t want to leave and I never do. I like the club, the city, the people, the players here… everything,” he told EFE.

“It’s wonderful because I always feel supported. Now I am relaxed, I’ve been doing things in the best way possible, trying to improve, because that’s what I want.”

Colombia coach Jose Pekerman stood up for Mina before the World Cup, criticising Barcelona for not playing him.

“In the last few months in Barcelona he hasn’t played much and that’s not great, when he had to play they weren’t many expectations,” he said.

“Football is very fast, a very fast paced game, we have to decide very quickly what you’re going to do.

“I think he’s got a great future in world football. We know that the current situation is difficult because it’s a very important club and he joined the club at a moment when they really wanted to play with just one play.

“It shouldn’t be like that, football is a team game and when you have a team you have to play the same way.”