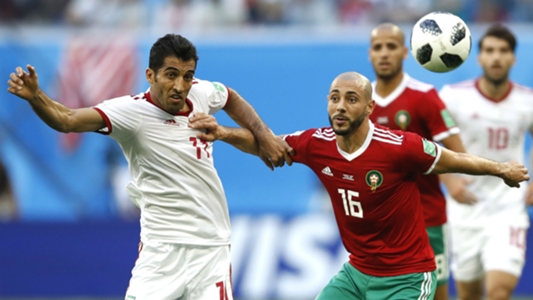 Following his decent performances at the just concluded World Cup in Russia, the winger has earned himself a deal worth $10 million [£7.5 million] and will continue his career in the Middle East with the Saudi Professional League outfit.

The former Galatasaray and Malaga player spent last season on loan at Leganes and helped them maintain their top-flight status with a 17th place finish.

Everton winger Yannick Bolasie has agreed terms with Fenerbahce as he closes in on a loan move to the Turkish Super Lig, Fanatik claims.

The DR Congo international is expected to join the Istanbul outfit in a matter of days following Marco Silva’s approval for the winger’s temporary departure.

Brighton and Hove Albion are close to completing an £18 million swoop for Lille midfielder Yves Bissouma, according to  Record .

The Seagulls are set to beat Porto to the signature of the versatile 21-year-old who had a fine campaign in the French Ligue 1 last season.

The Mali international could be the second African player to join Chris Hughton’s side this summer after Nigeria’s Leon Balogun.

Trabzonspor have intensified their chase for Sunderland midfielder Didier Ndong by submitting an undisclosed offer for the midfielder, according to Taka .

Ndong has attracted interests from Cardiff City and Serie A clubs including Fiorentina and Atalanta after seeing a £6.6million move to Italian side Torino fizzle out this summer.

The Gabon international is one of the top earners at the Stadium of Light that the club want to get off their books as they prepare for life in the third tier of the English league.

Napoli have placed an £80 million price tag on Kalidou Koulibaly to fend off interest from Chelsea, Mirror reports.

The centre-back has been a long term target for the Blues but the Partenopei are reluctant to see one of their key players follow former manager Maurizio Sarri and Jorginho to the Stamford Bridge.

The 31-year-old is now a free agent this summer despite having a year remaining in his contract with the Legends.

Emenike joined Olympiacos from Fenerbahce in July 2017 and was sent out to Las Palmas on loan where he didn’t play a single game in the second part of last season.

Rayo Vallecano have reunited with Gael Kakuta after the DR Congo international signed a four-year deal.

Check out the full story on Goal!

Leicester City are set to have talks with Wilfred Ndidi over an improved deal as a reward for his impressive displays in the past campaign, DailyMail claims.

The Nigeria international who was the best tackler in the English Premier League last season , currently earns £35,000 per week at the King Power Stadium.

Napoli in advanced talks with Sabaly

Napoli held a positive meeting with Youssouf Sabaly’s agents over a possible move, according to Sky Italia .

The Serie A side want to agree terms with the Senegal international before coming to the table with Bordeaux who have requested around €12 million for the right-back.

Wilfried Bony is keen on staying with Swansea City next season and help them return to the English Premier League despite reported interests from Besiktas, according to BBC .

The Ivorian managed just two goals in 15 appearances before a torn ACL ruled him out for the rest of last season.

Bony is eager to repay the club’s faith but the Swans need to drop their top earners in order to balance their books and adapt to the Championship.

The 30-year-old is out of contract this summer and might bring an end to his three-year stay at the Selhurst Park.

Sako’s former club Wolverhampton Wanderers are reportedly interested in signing him on a free transfer as he continues his recovery from an ankle injury he picked up in January.

The Senegal international could be set to leave the Turkish Super Lig club less than seven months after joining them from Tianjin Teda in January.

Diagne scored 12 goals in 17 league games in the second half of the 2017-18 campaign – a run that attracted interests from England.

Swansea City forward and Ghana international Andre Ayew is close to joining Fenerbahce on a season-long loan, according to Ghanasoccernet .

Ayew who returned to the Liberty Stadium from West Ham in January, is keen on top-flight football after the Swans were demoted to the Championship last season.

Meanwhile Fanatik reports that the Turkish Super Lig side representatives are in England to convince Everton winger Yannick Bolasie over a loan move this summer.

The DR Congo international has struggled for form at the Goodison Park due to an anterior cruciate ligament injury that ruled him out for over a year.

Stoke City want Liverpool winger Sheyi Ojo as part of the deal to take Xherdan Shaqiri to Anfield, according to The Sun .

The Potters are in talks with last season’s Champions League finalist to take the Anglo-Nigerian on loan as Shaqiri edges closer to a £13.5million move to the Merseyside club.

Ojo was on loan at Fulham last season and played a key part in ensuring the Cottagers return to the English top-flight next season.

Brighton and Hove Albion are in talks with French Ligue 1 club Lille over a summer swoop for midfielder Yves Bissouma,  according to DailyMail .

The Mali international is priced at £17.7 million and still has three years left in his contract with the Stade Pierre-Mauroy outfit.

Bissouma who moved to the French top-flight from Real Bamako in 2016, has attracted interests from Everton, Schalke 04, Tottenham Hotspur and Monaco.

Senegal international Badou Ndiaye is for a return to Galatasaray this summer – after spending less than seven months in the English Premier League, Milliyet claims.

Following Stoke City relegation to the Championship, the 27-year-old is pushing for a move to the Turkish Super Lig and he is ready for a €750,000 pay cut from his current earning of €2.75 million per-year at the bet365 Stadium.

Chelsea will no longer chase Senegal international Kalidou Koulibaly after reaching an agreement with Napoli to sign just Maurizio Sarri and Jorginho, according to Napoli CalcioLive .

Jorginho is expected to join Sarri at the Stamford Bridge when he succeeds Antonio Conte but the Italian club will still have Jose Callejon, Elseid Hysaj and the centre-back in Naples.

Koulibaly has been strongly linked with the Blues this summer following his fine defensive displays last season.

The 55-year-old guided the north African country to the World Cup in Russia as his side managed a win and two defeats before their group stage exit.

Check the full story on Goal!

The Ligue 1 club are ready to beat Roma and Liverpool to the signing of the 25-year-old who is yet to confirm a new home after disclosing his intention of leaving Holland.

The 27-year-old is set to ink a four-year deal with Les Verts that will see him earn an annual salary of €4 million [ £3.5 million].

Khazri was on loan at Rennes last campaign where he returned nine goals in 24 matches across all competitions.

Genoa have offered Serie B side Cittadella €4 million [£3.5 million] for the signing of Ivorian forward Christian Kouame, according to Football365 .

The 20-year-old could be heading to the Italian top-flight this summer after an impressive form of 12 goals and 11 assists in 43 league appearances last term.