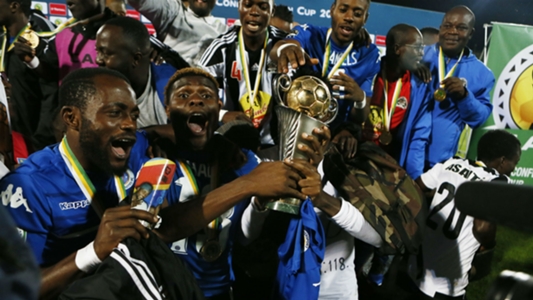 Former Cameroon youth international Ntakeu arrives on trial from Angolan side Recreativo de Caala and has also had a stint in Algeria before.

Ogouloye is in the books of Ivorian outfit Sewe Sport and is part of the Benin national team.

Following the departure of Salif Coulibaly to Egyptian giants Al-Ahly last week, 25-year-old Ogouloye is being auditioned with the possibility of being a direct replacement for the Mali defender.

“By bringing the 24-year-old forward (Ntakeu), TP Mazembe relies on his technical skills in front of the goal and his speed to give new life to Ravens offensive line,” said TP Mazembe in a statement.

“Apollinaire Danvide Ogouloye central defender is 25 years-old, 1.85m and 78 Kg, is of Benin nationality. He comes from Sewe Sport of San Pedro in Ivory Coast. He is a former player of the AS Douanes de Niamey (Niger), with which he has often distinguished himself in the Champions League.

“The big family of Ravens welcomes them and wish them a very good trial period.”

The two arrive at TP Mazembe as the club is reeling from being dethroned as DRC champions by old foes AS Vita.

On Tuesday the Congolese will play Algerian giants MC Alger in a Caf Champions League Group B in which they so far enjoy a 100 percent winning record.

They prepared for MC Alger with a friendly match against South African giants Orlando Pirates last week in Zambia.