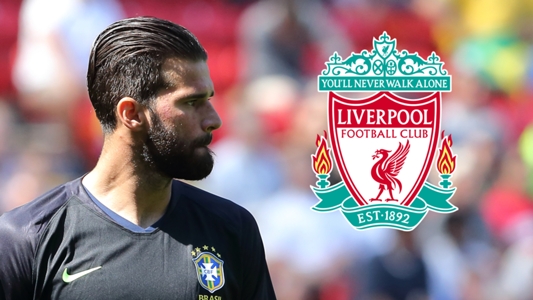 Liverpool have completed the £65million (€73m/$85m) signing of Alisson Becker from Roma.

The Brazilian has signed a six-year deal at Anfield and becomes the most expensive goalkeeper in history by doing so.

He is the Reds’ fourth signing of what is becoming an impressive summer for Jurgen Klopp’s side, joining Naby Keita, Fabinho and Xherdan Shaqiri in moving to Merseyside.

Liverpool identified the 25-year-old as their preferred choice to be the club’s No.1 last season, and worked hard this summer to thrash out a deal with Roma, who were reluctant to lose one of their star men to the Reds for the second year in a row. Indeed, the £36.9m deal which took Mohamed Salah to Anfield last summer was discussed during the clubs’ negotiations for this deal.

The Italians’ initial asking price of £90m, quoted to Liverpool back in January, was seen as excessive but it was made clear in the past month that the Serie A club would settle for a deal closer to £75m, and that the player was keen on a move to Merseyside.

Talks progressed quickly this week as Liverpool sought to head off competition from Chelsea, with a deal agreed as the Londoners waited to sell Thibaut Courtois to Real Madrid. Anfield sources have told Goal that Liverpool will pay £56m up front for Alisson, with £2.2m of that going to his former club, Internacional.

A further £9m could be paid in add-ons, which are dependant on Champions League qualification as well as Premier League and European wins.

Upon signing with the Reds, Alisson told the club’s official website: “I’m really happy, it’s a dream come true to wear such a prestigious shirt for a club of this size that is used to always winning.

“In terms of my life and my career, it’s a huge step for me being part of this club and this family.

“You can be certain that I’ll give my all.”

Liverpool manager Jurgen Klopp was pleased with the signing, saying he needed to have a conversation with the club’s owners but they were on board with the move.

“At one point in the last few weeks it came up, the opportunity to sign one of the world’s best goalkeepers – then it’s not a long thought, to be honest, it’s only that you need to have a little talk with the owners!” Klopp told the club’s website. “They were quite excited, so we did it.”

However, Klopp dismissed concerns over Alisson’s price, citing the realities of the market.

“It shows the value of goalkeepers, of course, in this moment. It will happen a lot in the next few weeks I guess and that’s it, so we are really happy to have him here now.”

Liverpool will this weekend fly to the United States where they will play three games in the International Champions Cup. Alisson is expected to join up with his new team-mates, including Brazilian colleague Roberto Firmino, upon their return.

Klopp’s men will travel to France for a short training camp upon their return from America before friendlies against Napoli and Torino. They begin their Premier League campaign on August 12 at home to West Ham.