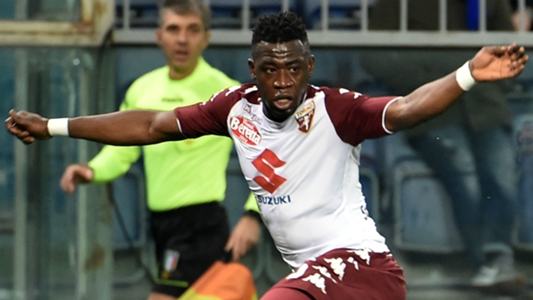 Torino midfielder Afriyie Acquah is ‘very close’ to signing for newly promoted Serie A side Empoli, according to Toro.it.

The Ghana international is set to sign a three-year contract with the option of a further year in a deal that worth €2.5 million.

Ola Aina is close to joining Torino on loan from Chelsea after both clubs reached an agreement on Sunday, reports Sky Italia.

The Super Eagles defender is expected to have his medical tomorrow after arriving at the Caselle Airport in Turin this afternoon.

The Bulls also have the option to buy Aina for €8 million at the end of the season.

The DR Congo international was reportedly close to joining Burnley temporarily on the transfer deadline day only for the Toffees to opt out.

Bolasie was not listed in Everton’s 2-2 draw against Wolverhampton Wanderers on Saturday which clearly indicates that he is not part of Marco Silva’s plans.

Obi joins the Stadio Bentegodi outfit on a three-year contract with the option of an additional year.

Balde to join Inter on loan

Keita Balde is on the verge of returning to the Serie A after Monaco and Inter Milan agreed on a loan with an option to buy, according to Calciomercato .

The Nerazzurri have agreed to loan the Senegal international for €5m and make the move permanent at the end of the season for €34m.

Keita only left the Italian top-flight a year ago from Lazio and has agreed a five-year contract already with Luciano Spalleti’s side.

The Nigeria international turned down interests from England and he is now set to take his career abroad as negotiation between both clubs nears conclusion.

Hapoel Beer Sheva forward Anthony Nwakaeme has been spotted at the Istanbul Ataturk Airport ahead of a proposed move to Trabzonspor.

Few hours after helping his team earn a 2-2 draw in Thursday’s Europa League game, the Nigerian forward could team up with compatriot Ogenyi Onazi in the Turkish Super Lig club.

Anthony Nwakaeme spotted at the Istanbul Atatürk Airport in Turkey ahead of a move to Trabzonspor. Source: @tehdit

The striker pulled a quick one on Hapoel Beer Sheva? With his team 2 goals down v. APOEL yesterday in Israel, he assisted Ogu’s goal before getting the equaliser. pic.twitter.com/aOXn32SOlC
— Tolu Olasoji (@Tollexrism) August 10, 2018

Lookman spent the second half of last season on loan with the Bundesliga outfit, making 11 appearances and contributing five goals but the Bulls have ruled out a £30m move for Anglo-Nigerian.

Malaga have snapped up Alfred N’Diaye on a season-long loan from Villarreal.

The towering striker who played for Girona last season penned a three-year deal worth about £2.3m [Sh300m].

Fenerbahce in talks for Diouf loan

Stoke City forward Mame Biram Diouf is set to leave to leave the club, with Fenerbahce keen to bring the striker in on a season-long loan deal, AMK reports [via Sport Witness ].

The 30-year-old is keen on leaving the bet365 Stadium following their relegation to the Championship.

The Senegalese attacker was an unused substitute for the Potters in their 3-1 league defeat to Leeds United last Saturday and seems to be excluded from Gary Rowett’s plans for the season.