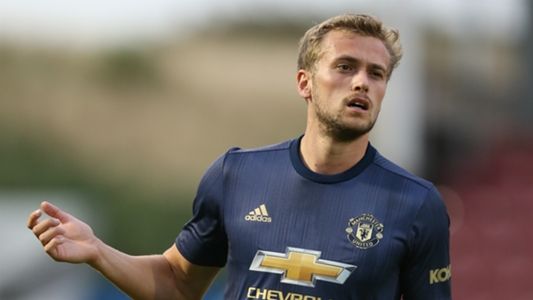 Manchester United have sent James Wilson on loan to Aberdeen.

The 22-year-old striker will spend the season with the Scottish Premiership side as he begins his fourth loan from United, having already enjoyed spells in the Championship with Brighton, Derby County and Sheffield United.

England Under 21 international Wilson scored twice on his senior debut for United against Hull in the Premier League in 2014 and has since gone on to make 20 appearances for the Red Devils.

After recovering from a knee injury, he was sent to Sheffield in January to see out the rest of last season and made nine appearances, scoring once.

And he is set to take on the No.9 jersey and possibly a key role at the Scottish side, who have been in the hunt for a new attacker since Adam Rooney left to join Salford City this summer.

“I am very happy to be here,” he told the club’s website. “It was my coach at Manchester United Ricky Sbragia who first told me about the interest from Aberdeen, probably three or four weeks ago, but I have since heard that the club have been following my progress for a good while. They have kept an eye on me which is nice.

“I just felt coming to Aberdeen was the right decision to make. I have spoken to the manager on the phone. He is very positive. He told me a lot about his philosophy and plan for me going forward for the season.

“I chose Aberdeen because it is a massive club. Scottish football is also getting a lot of coverage, a lot of good coverage. I know a lot of the Aberdeen games are televised. All round I feel it is the right move for me. It is a new beginning for me really.

“A few of my loan moves have not worked out as well as I would have hoped so this one is very important. It is a big year for me. I am hoping to get as many minutes under my belt as I can and hopefully get goals to help the team push forward.

“Without blowing my own trumpet, I do back myself and I am a confident lad. I would like to think that this will be a good move and will be a special year. Confidence is very important for a striker. If you can keep it high then everything else will follow.”

Meanwhile, Dons boss Derek McInnes was delighted to see a highly-rated forward added to his squad.

“I am absolutely delighted to secure James on a season long loan as he is a player I feel will very quickly become an important member of the squad for us,” he said.

“He is a real quality player, who I think will suit the way we play, and, having spoken to him, I think he sees this move as a real opportunity for him. There were other clubs interested in taking James but he feels this is the right place for him to continue his development.

“I’d also like to thank Manchester United for the part they played in making the loan happen.”