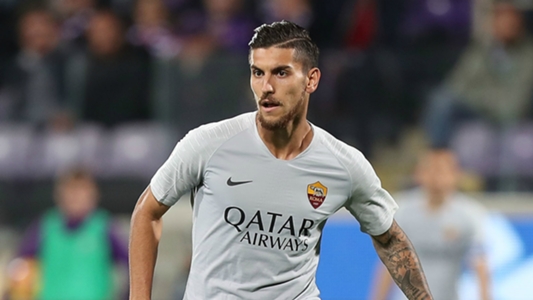 Lorenzo Pellegrini is not interested in joining Manchester United, his agent has said amid claims the Premier League club have offered to double the Roma star’s salary.

It was reported in Corriere dello Sport on Monday that the 22-year-old’s representative, Giampiero Pocetta, returned from talks with the Premier League side with the assurance they would meet the release clause in his contract and offer him a much better wage.

However, the midfielder has been a key player for Roma since he re-signed for the capital club last year after two seasons with Sassuolo and his contract runs until 2022.

As he continues to thrive in Eusebio Di Francesco’s team, Pocetta insists Pellegrini will not be distracted by rumours about a move to England.

“Pellegrini is only thinking about improving with and for Roma,” he told Corriere dello Sport.

“I’m sorry that rumours [about Manchester United] have spread about financial aspects relating to him and his team-mates, but it doesn’t matter for Lorenzo. He doesn’t live for meetings, especially financial ones.

“Then, when it’s time, we’ll sit down with Monchi again.”

While Roma are struggling to keep up with the best in Serie A as they sit 15 points behind leaders Juventus, Pocetta says Pellegrini is still in good form and focused on improving in Italy.

“If I have to talk about Lorenzo right now the only thing I can talk about is his extraordinary form,” he added.

“He’s getting what he deserves on the pitch, and the rumours about the transfer market have never distracted him nor disturbed him.”