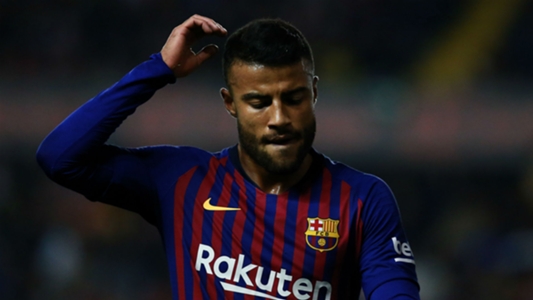 Rafinha’s father and agent Mazinho has said his son needs to leave Barcelona in search of more playing time.

After spending the second half of last season on loan at Inter, the forward has struggled to find minutes with Barca in 2018-19, making just six appearances for a total of 259 minutes.

That lack of playing time has left Mazinho frustrated and questioning his son’s future at Camp Nou.

“Only the coach knows what he has or doesn’t have. The truth is that we’re trying to get Rafa into a situation where he plays regularly.

“We have to look for an exit because it’s really complicated for him here [at Barcelona].

“It’s been basically two years hardly playing and he needs a club to give him 30 or 40 games a season.”

Mazinho, who was a part of Brazil’s victorious 1994 World Cup side, said the situation was especially frustrating due to Rafinha putting together some strong performances this term, including a goal against Inter in his only Champions League start of the season so far.

“Here, when you have three games in a row, then you’re cut [from the team]. The coach has in his head his way of working, but for the player… [Rafinha] has done well in preseason, he’s had some spectacular games. He doesn’t understand it.

“This is football, it’s normal, of course, and we have to be happy because we’re at a great club. But we need to leave to play more.”

Mazinho has said that his son could look to leave the Camp Nou as soon as January.