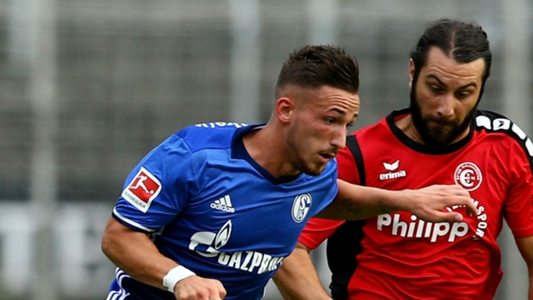 Former Schalke youngster Donis Avdijaj has revealed he had offers to join some of the top sides in the world, including Manchester United, Juventus and Liverpool.

The 22-year-old currently plays for Eredivisie club Willem II, having departed Schalke on free transfer last summer having spent much of the past few years on loan.

But it was not always that way for Avdijaj, as he lit up the youth levels in Germany, scoring 17 goals for Schalke’s U-19 side in just 17 games, only seven of those starts, during the 2013-14 season.

In addition, the youngster did well for the Germany U-17 side, scoring six goals in six during qualifying and in the UEFA Under-17 European Championships.

Those performances had the youngster on the radar of many of Europe’s largest clubs, and as a teenager, who by his own admission did not even have an agent at that point, had a tough time keeping it all together.

“At that time [after signing his first contract at Schalke in the age of 18] everyone wanted to be my friend,” Avdijaj told Goal. “Everyone wanted to tell me what’s best for me. I did not have an agent at the time and did not know exactly how to handle the hustle and bustle.”

Now a Kosovo international, Avdijaj admittedly did understand how to properly handle all that success, expecting it to keep going after transitioned into the pro game..

“In my youth, I scored more than 20 goals each season. I also scored 13 times in the junior national team in 13 games and I thought it would go on like this as a professional as well.

“When I was 15 or 16 years old, I could not properly classify this pat on the back, especially since the very big clubs were already trying to sign me and offering millions.

“Not going crazy in such a phase is much harder than going crazy. Before signing for Schalke, I had offers from Juventus, Arsenal, Manchester United and Liverpool. No matter what game or tournament, scouts were always there to watch me.”

However, the attacker was unable to reach the same heights on the professional level that he did as a youth.

Avdijaj ended up spending parts of a pair of seasons on loan with Austrian side Sturm Graz, before returning to Schalke for a brief time in 2014-15, and scoring his first two Bundesliga goals.

But he went back out on loan with Roda in the Eredivisie last year, before leaving on free this past summer.

This season, the 22-year-old winger has four goals and two assists in 13 games in the Eredivisie.