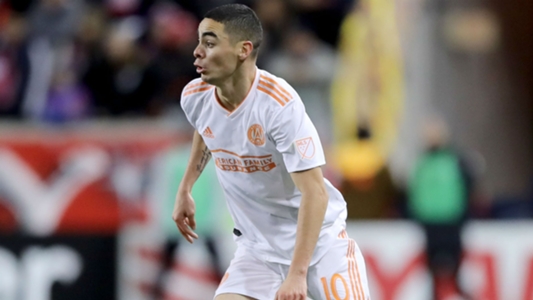 Miguel Almiron may well leave Atlanta United this winter, but club president Darren Eales once again has made it clear that any team looking to land the Paraguayan playmaker better be ready to spend.

Almiron has had two stellar years with Atlanta in MLS and will lead his team against the Portland Timbers in the 2018 MLS Cup final on Saturday.

His form has attracted plenty of notice, with Premier League clubs Newcastle, Arsenal and Tottenham all linked to his services.

His agent, Daniel Campos, has also claimed that the midfielder is drawing interest from “two or three clubs” in England and that “certainly Almiron will play in the Premier League.”

But Eales says any deal for his star man won’t involve “chump change.”

“I have seen some laughable things in the press, clearly we are never going to loan one of our players out and we are certainly not going to let them go for the chump change that I have seen in some reports,” he told Sky Sports.

“If it’s a proper, serious offer then it’s something we would consider, but not for the laughable figures that I have seen mentioned in the press.”

While Atlanta may not be willing to let one of the club’s star men leave on the cheap, Eales does believe that when offer is right, Almiron will be able to adapt quickly in a new league.

“He has proved in these two years that he is by far and away one of the best players in the league,” said Eales. “He is still a young player, he is a Paraguay international and it’s brilliant he can cope with the physicality of the Argentinian league with Lanus and also the MLS.

“He is an amazing player, he was one of the best players on the pitch in both of the All-Star games that we played against Juventus and Real Madrid. I have no doubt that when the time is right, and the offer is right, he can be a success in whatever league he goes to.”

Almiron has notched 22 goals and 29 assists in MLS play, including playoffs, over the last two season, finishing second in MVP voting this season behind record-setting teammate Josef Martinez.