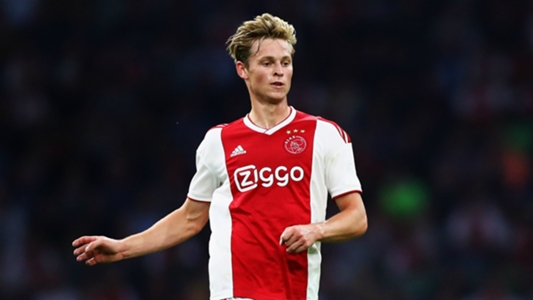 Frenkie de Jong remains firmly committed to Ajax for the immediate future, says his agent, as rumours continue to swirl on the Dutchman’s future.

The highly-rated midfielder has been the subject of much speculation over a move to a number of European heavyweights.

Paris Saint-Germain are thought to be leading the chase for the 21-year-old’s signature, with a deal worth €75m (£67m/$85m) with Manchester City and Barcelona also in the mix.

De Jong’s agent Ali Dursan has now poured cold water over any chance of a January switch, reiterating that the former Willem II man is contracted to the Eredivisie outfit.

“There’s no deal yet,” Dursan told NOS. “Frenkie will stay at Ajax til next summer. That’s guaranteed and it’s all I can say right now.”

Manager Erik ten Hag also acknowledged the rumours during his pre-match press conference ahead of his side’s game against PEC Zwolle, admitting that should De Jong choose to remain at the club long-term, it would be a boost for the reputation of the Eredivisie as one of Europe’s top leagues.

“It would be great for Ajax, a huge compliment,” the 48-year-old stated. “This would be good for the evolution of Ajax and the appearance of Dutch football.

Expounding on the transfer speculation, in particular the stories surrounding a big-money bid from Ligue 1 champions PSG, he added: “It’s an issue since the start of the season.

“I just had a chat with Frankie and he’s speaking French already.

“If it’s true, PSG is a very nice club, but there are many more nice clubs in the world.”

De Jong made the move to Ajax from Willem II in 2016, where he won the Jupiter League Talent of the Season in 2016-17 for the club’s reserve team Jong Ajax.

He broke through into the first team during the 2017-18 campaign with a run of excellent performances, becoming a regular starter as they finished second behind PSV and qualified for the Champions League.

His good form towards the end of the season earned him his first senior call-up to the Oranje, where he made his debut in a friendly victory over Peru in June.