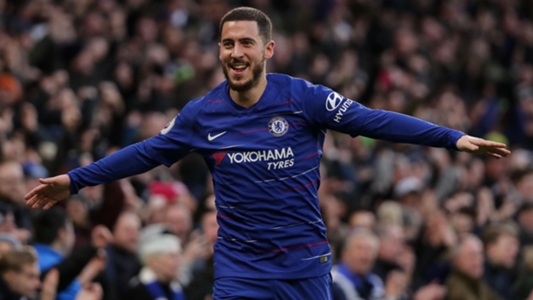 Chelsea boss Maurizio Sarri is unaware of any decision Eden Hazard has made regarding his future after the Belgian claimed he knows where he wants to play next season.

Hazard has been strongly linked with Real Madrid as Los Blancos continue their search for a player to fill the void left by Cristiano Ronaldo’s departure to Juventus.

The 28-year-old is enjoying a productive season in terms of goals, having scored 12 in 24 Premier League matches so far this term.

But reports around his future have been a constant distraction for Chelsea, and the fact Hazard’s contract expires next year puts him in control of the situation.

In an interview with radio station RMC Sport which was published this week after being recorded two months ago, Hazard said in no uncertain terms, “I know what I am going to do”.

Sarri, however, is yet to find out, despite the pair talking to each other on a regular basis.

“I speak with Eden, but about his position on the pitch, not about that [transfers],” Sarri told reporters on Friday.

For the moment, Chelsea and Sarri are relishing the link-up play between Hazard and new signing Gonzalo Higuain, with the duo both scoring twice in a 5-0 win over Huddersfield Town last Saturday.

“I think Gonzalo is a great player,” Sarri said. “He did very well everywhere. He did well in Madrid, Naples, Turin, maybe not so well in Milan, but he’s a great player and very useful for Eden.

“They are really very suitable to play together, I think. It’s very important I think for us that he’s determined, so he’s really very good for us.”