It was a moment which summed up an evening.

With the clock running down at the London Stadium, and Liverpool labouring but starting to build a degree of pressure as they hunted a winning goal against a retreating West Ham, Naby Keita picked up possession in the centre circle.

The Guinea midfielder was a few yards inside his own half, with space to move forward. A stepover and a dart to the left took him past Declan Rice, another deft touch moved him beyond Pedro Obiang. Suddenly, he was 25 yards from goal and Liverpool were in business.

The space was there, the pass was clear. Andy Robertson, up from left-back, was primed to flash a ball across the face of goal, where the Reds had three players waiting. Get it right, and Jurgen Klopp’s team would be taking three points from a difficult night in East London.

Instead, Keita chose a different option, attempting to fire a pass into Divock Origi in the centre of a crowded penalty area. Angelo Ogbonna cleared, and the chance was lost.

It’s been a bit like that for Keita at Liverpool, in truth; plenty of promise, a flash of undoubted quality and then a disappointing finale. To venture dangerously close to cliché territory, it’s ‘not quite happening’ for the £53million man.

Disappointing, for those who expected the 23-year-old to light up the Premier League following his transfer from RB Leipzig last season.

Liverpool waited a year for Keita, agreeing his signing in the summer of 2017, and he arrived on Merseyside with a reputation as a midfielder with a unique skillset, coveted by all of Europe’s top clubs. “I never had so many congratulations messages as I had after signing Naby,” Klopp told reporters after Keita’s deal was completed.

Klopp suggested that Keita, unlike Fabinho who also arrived last summer, would need little time to adapt to the Premier League, reasoning that he was used to high-energy, pressing football with Leipzig.

So far, though, his impact at Anfield has been fitful. In 14 starts and nine substitute appearances, he is yet to score and has registered just a single assist. The all-action dynamo we saw in the Bundesliga is yet to fully appear in England. 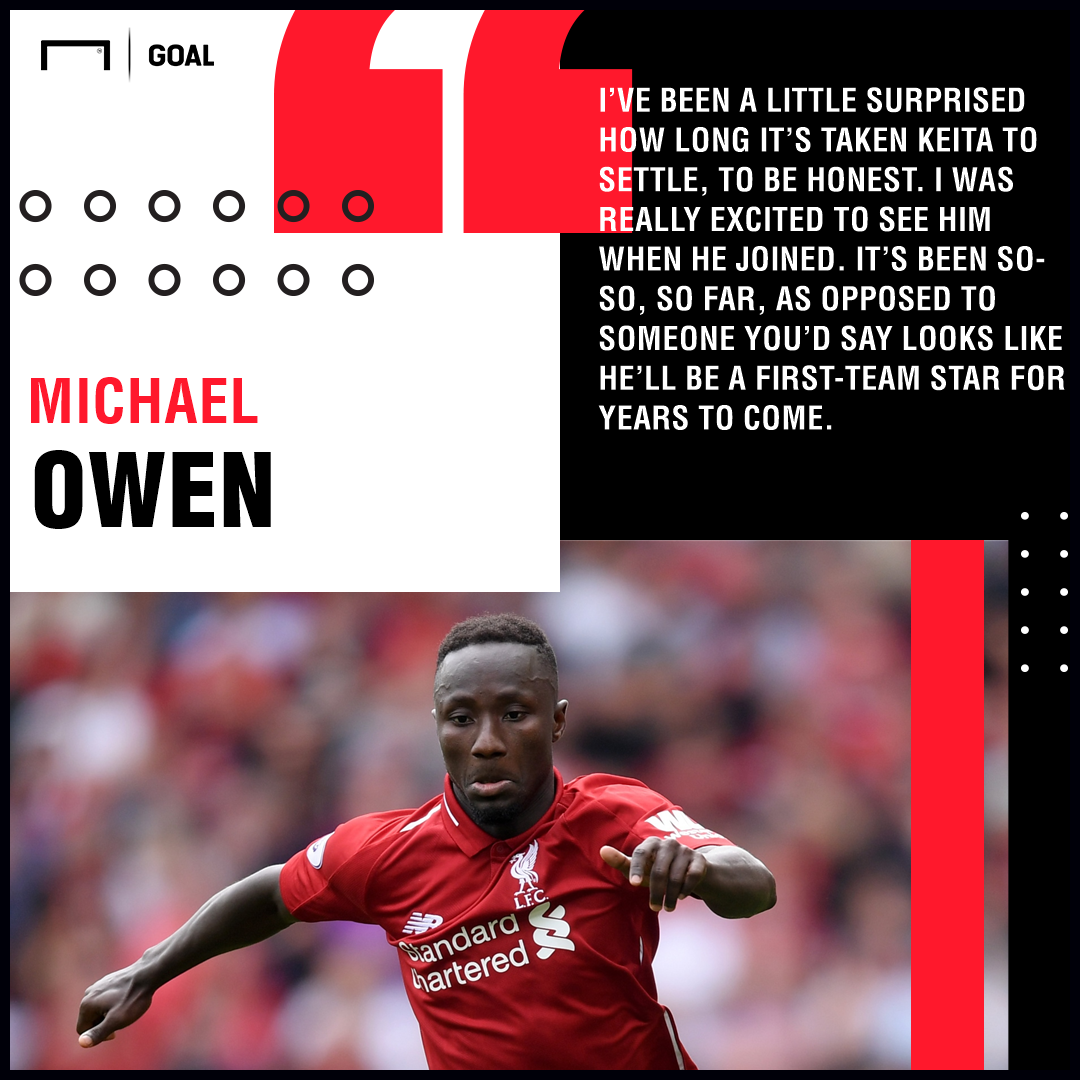 “I’ve been a little surprised how long it’s taken him to settle, to be honest,” former Liverpool star Michael Owen told Goal this week. “I was really excited to see him when he joined.

“He’s been fine, but he’s not blown my socks off. It’s been so-so, so far, as opposed to someone you’d say looks like he’ll be a first-team star for years to come.”

Even Klopp, who was more excited than anyone by Keita’s signing, knows questions over his form are fair.

“Happy so far, but still a lot to come,” he said last week. “Naby is an outstanding player, but he still has to improve.”

Injuries have not helped; a back issue curtailed his one and only Champions League start in Naples back in October, while a hamstring problem picked up on international duty with Guinea followed soon after. In a league as demanding as the Premier League, seemingly minor issues can have a big impact.

And with Klopp often opting for a 4-2-3-1 system, as opposed to the 4-3-3 of last season, it has been hard to find a role which brings out the best in the diminutive, dribbling Keita.

His best performance in recent months came at Burnley when he started in a midfield two alongside Jordan Henderson, enabling him to collect the ball deep – as he did in the second half at West Ham – and drive on either with a dribble or with an incisive forward pass. Had it not been for a world-class Joe Hart save, he’d have opened his Liverpool scoring account from 25 yards at Turf Moor.

As it is, he’s looked less effective when pushed out to a left-sided role, drifting to the periphery in games and looking a little out of sync with his team-mates. Perhaps, in a team as fine-tuned as this, it is to be expected? Especially if, as in Keita’s case, there is still a language barrier to overcome. Klopp mentioned this recently. 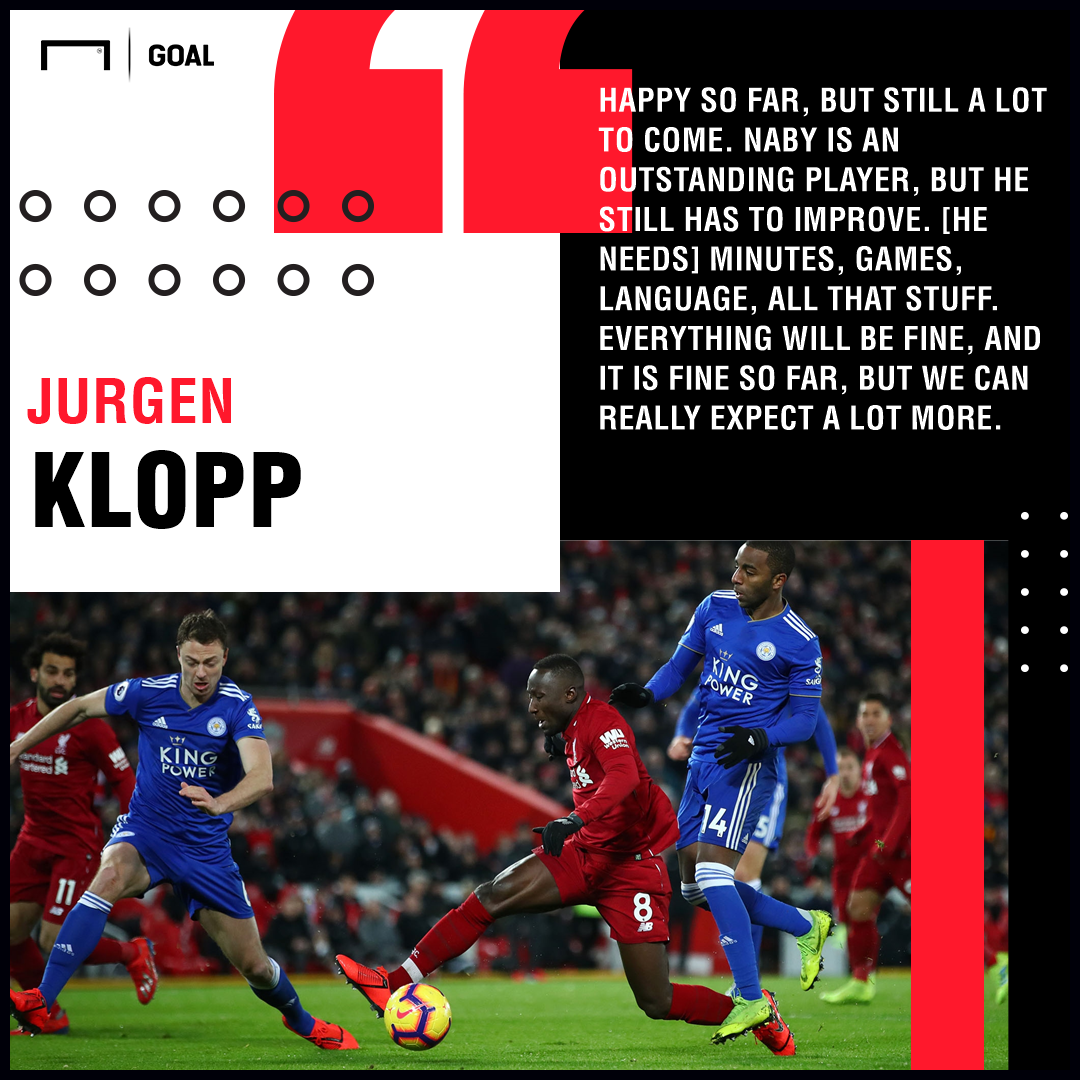 The examples of Robertson and Alex Oxlade-Chamberlain, not to mention Fabinho, are worth noting, as is the fact that Keita offers attributes – ball-carrying, penetrative horizontal passing, long-range shooting – that Liverpool have not seen from their midfield players, at least since Alex Oxlade-Chamberlain’s unfortunate injury last April.

There is faith at Anfield, as there should be, that Keita’s quality will win out. Certainly, it is far too early to be writing off a player of such ability, however underwhelming his opening months have been.

“How many players have we seen come from abroad and get better and better?” Owen says. “We’ve certainly seen from his previous club that he’s very talented, so I’m hoping that will come with a bit of time.”

Klopp added: “[He needs] minutes, games, language, all that stuff. Everything will be fine, and it is fine so far, but we can really expect a lot more still.”

In the meantime, his dilemma is clear. Klopp knows his big-money signing needs games – “rhythm,” as the German would call it – but with each fixture, each point, each goal precious to Liverpool in this most tense of title races, the temptation to stick to the tried and trusted – Henderson, Gini Wijnaldum, James Milner – will be obvious.

Henderson and Wijnaldum will be available again as Liverpool host Bournemouth this weekend, and it will be interesting to see how Klopp sets his side up – and who misses out – as they bid to return to the Premier League summit.

It’s been low-key so far, but Keita’s biggest challenges – and Liverpool hope his biggest contributions – are still to come.