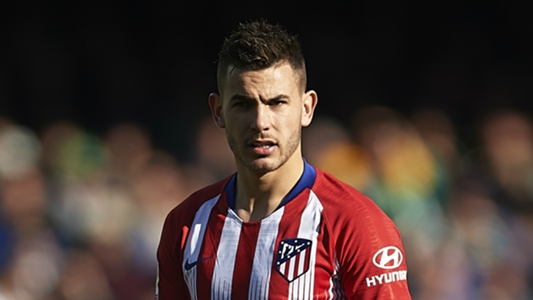 Lucas Hernandez will hold talks with Atletico Madrid over his future before the end of the season as the defender confirmed he was subject to a bid this past January.

The France international was strongly linked with Bayern Munich during the January transfer window, with the Bundesliga champions reportedly ready to trigger his €80 million (£70m/$91m)release clause.

However, Atletico’s executive director Miguel Angel Gil Marin insisted Lucas could not leave in January and Bayern instead completed a move for fellow France international Benjamin Pavard, who will join from Stuttgart after the 2018-19 season.

Lucas, though, suggested his long-term future may not lie at Atletico, with Bayern expected to resume their interest in the 22-year-old at the end of the season.

“To be totally honest, my personal situation changed and I had to make a decision that wasn’t all about me,” Lucas said to AS of the Bayern speculation.

“It’s true that in the transfer window there was a bid from another major European side and the first thing I did was relay that to Atletico.

“They made it clear that it was not an option they wanted to contemplate and we all agreed to review my situation before the end of the current season.”

Real Madrid previously tried to sign Lucas but the centre-back indicated he did not consider crossing the city to join Atletico’s rivals.

“I’m aware that the club are keen for me to stay but they’ve also stated that they would respect any decision I make,” Lucas added.

“It’s true that approximately two years ago Real Madrid made a significant offer via my agent but at the time I felt I owed much to Atletico.”

Atletico host Juventus in the first leg of their last-16 tie in the Champions League on February 20.

Diego Simeone’s side have a special interest in reaching this year’s final as it will be played at their Wanda Metropolitano home.

“It’s a tough tie and the same can be said from their point of view,” Lucas said.

“Both teams are in good form but there will be time to concentrate on that game. First up we’ve got to focus on the games against Real Madrid and Rayo Vallecano.

“Playing the final at your home ground with your fans present is a huge motivation. We really want to go as far as we can and I feel that Atletico is due a win in a Champions League final.”