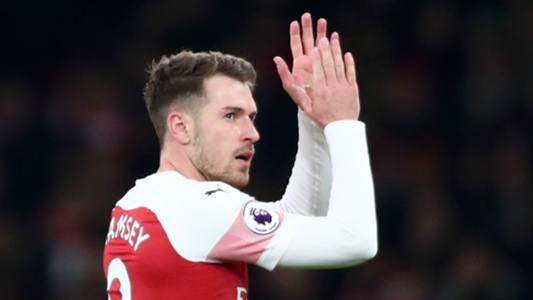 Arsenal midfielder Aaron Ramsey has signed with Juventus for next season as the Serie A champions have announced the Wales midfielder will join the club in the summer on a four-year contract.

Ramsey was in the final six months of his contract with the Gunners, which made him eligible to sign a pre-contract and leave the London club for free in the summer.

Wages were not disclosed, but Goal understands Ramsey will earn €7 million (£6m/$8m) plus bonuses per year.

Juventus also announced they will pay a €3.7m fee to register Ramsey.

After the announcement, Ramsey penned a farewell message to the Gunners faithful on Instagram, thanking them for their support throughout the years and promising to give his all in his final months with the team.

“As you may have already heard, I have agreed a pre-contract with Juventus football club,” Ramsey wrote. “I wanted to issue a personal statement for all the Arsenal fans who have been extremely loyal and supportive.

“You welcomed me as a teenager and have been there for me through all the highs and lows I’ve encountered during my time at the club. It is with a heavy heart that I leave after 11 incredible years in North London.

“Thank you. I will continue to give the 100% and hope to finish the season strongly, before heading on to my next chapter in Turin.”

Arsenal also released a statement, thanking Ramsey for his time at the club saying: “Aaron’s made a fantastic contribution to our club since joining from Cardiff City in 2008. He has always been a consummate professional and will always have a special place in the hearts and memories of Arsenal fans around the world.

“We look forward to Aaron helping the team to a strong end to this season before he joins Juventus in the summer.”

Ramsey will bring to a close an 11-year run with Arsenal, having been part of three FA Cup winning sides turning his time with the Gunners after moving from Cardiff City in the summer of 2008.

However, his playing time decreased this season, as he made nine starts but 13 substitute appearances in the Premier League this season under new manager Unai Emery.

He had previously announced his intent on running down his deal after talks broke down with Arsenal early in the season, with reports of interest from Juventus, along with Bayern Munich and Premier League rivals Manchester United and Liverpool.

Despite the increasing likelihood of his departure, Ramsey has been hailed by Emery for his effort as he continues to be a member of the squad as a substitute.