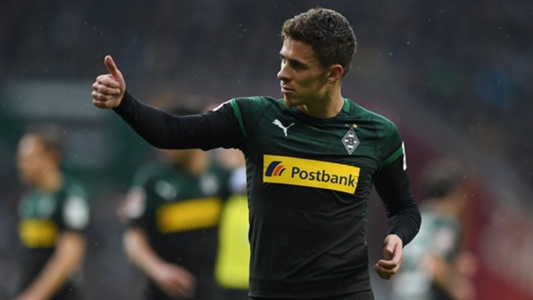 Borussia Monchengladbach’s head of  Max Eberl says there is a chance Thorgan Hazard could extend his stay with the club.

The midfielder joined the German club from Chelsea in July 2015, signing a five-year contract with a  transfer fee that was reported to be €8 million (£5.9m).

Hazard has scored nine goals in 20 Bundesliga appearances for the club this season and has been a persistent source of transfer rumours throughout his stay.

Still, Eberl says there is a chance they can keep hold of the 25-year-old star, although he admits it would be difficult.

“He told us he wants to see where we play in the end,” Eberl said according to Transfermarkt.

“Yes, he is interesting for other clubs. Nevertheless, we have a chance to extend with him if we succeed on the field. But if Thorgan still says he wants to take the next step, then it must be next summer.

“I can not do without this money. Of we will have to be creative if we want to extend it with him. But there are situations right now, you have no chance.”

Monchengladbach no strangers to selling off players, having sold Jan Vestergaard to Southampton in 2018 to finance the sale of Anthony Plea.

Eberl called the signing of Plea “utopian” and the sale of Vestergaard a bit of good business for the club.

“When Southampton got around to Vestergaard, it was an opportunity for us to make some money,” Eberl said.

“When the money was in the box, it was clear that we wanted to attack our benchmark.”

The next sale, if not Hazard, may very well be Matthias Ginter, who has supposedly attracted interest from Arsenal and Tottenham.

“Nice. That means that he plays a good season,” said Eberl.

“First of all, I have to have an offer. For me, it only becomes interesting when a player comes to me. Then I have to deal with it. For Ginter, there was no request.”