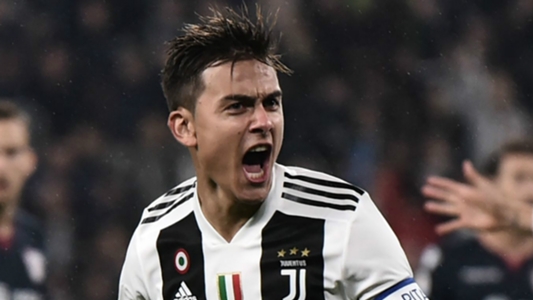 Juventus have indicated they have no plans to sell Paulo Dybala due to being unable to sign either Lionel Messi or Neymar as a replacement.

The Argentine has recently been linked with a move to Real Madrid, with reports suggesting Los Blancos are planning a bid worth €120 million (£105m/$135m) this summer.

Manchester United are also thought to be interested in Dybala, who netted against the Red Devils in the Champions League earlier this season.

Dybala’s future has come under the microscope after being left on the bench against Sassuolo, previously having stormed off in the draw with Parma.

But sporting director Fabio Paratici told Gazzetta Sport: “Those who leave are those who want to. I repeat, our squad is difficult to improve.

“Who do you get that is better than Dybala? It’s difficult to sign Messi. Even with  I’d have doubts.

“Dybala is someone who is always there, until the end.”

While Messi is contracted to Barcelona until 2021 and has shown few signs of wanting to leave Camp Nou, Neymar continues to be linked with leaving Paris Saint-Germain.

Though Juventus have broken their transfer record twice in the last three years to sign Gonzalo Higuain and Cristiano Ronaldo, the club prefer to focus on signings for the future or free transfers.

Former chief-executive Giuseppe Marotta was responsible for many of those cut-price arrivals, though his move to Inter means the Bianconeri are now up against the 61-year-old in the transfer market.

However, Paratici sees no rivalry with his former colleague.

“How long have we worked together? 15 years,” he added.

“A challenge between us in the market? We do two different jobs, that is the truth.”

Another player the Serie A champions have no plans to allow to leave is Moise Kean, with the likes of Genoa, Schalke, Leeds United and Newcastle all linked with the 18-year-old.

The Old Lady see a big future for the Italy international and feel he is capable of establishing himself in the first team.

Paratici explained: “He’s a great forward. He’s one of those who will sooner or later start scoring in the Champions League.

“We’re going to be seeing more of him for some time. He is at Juventus because he is at that level, we’re not keeping him here to do him any favours. He has immense potential.”