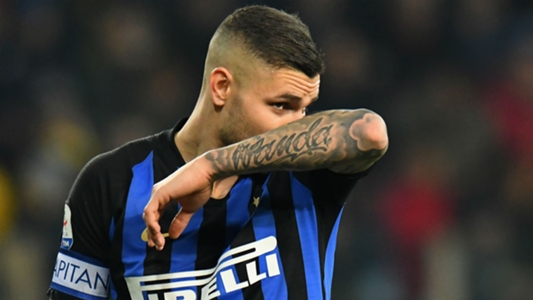 Argentina international Icardi has been heavily linked with a move to Real Madrid recently, as talks over a new contract at San Siro continue to stall.

Icardi’s agent and wife Wanda Nara has insisted that her husband will commit his future to Inter, but speculation is likely to be fueled after the club’s latest announcement.

Wanda has stated her belief that Icardi should be offered a much larger wage packet to reflect his standing in European football while also admitting that several top clubs from Spain, England and France have already expressed an interest in him.

The 25-year-old hitman has scored nine goals in 20 Serie A matches this season but he will no longer serve as captain, with Handanovic set to take up the role starting on Thursday in the Europa League.

The Club can confirm that Samir #Handanovic is the new Inter captain.#FCIM

Icardi is contracted to Inter until 2021, but his future at the club has now been thrown into even greater doubt, with Madrid tipped to launch a large bid for his services during the next transfer window.

Luciano Spalletti’s side are currently sitting third in Serie A and a whopping 20 points behind leaders Juventus in the table after 23 matches.

Inter’s only hope of silverware this term now lies in the Europa League, with a round of 32 clash against Rapid Vienna to negotiate starting on Thursday.

Icardi is expected to retain his spot in the starting line-up for the clash before Inter return to Serie A duties against Sampdoria on Sunday.

The former Barcelona academy star is currently valued at around €90m (£79m/$102m) and is revered by supporters and experts as one of the best natural centre-forwards in the world.