Phil Foden could have had a hat-trick in Manchester City’s FA Cup game against Newport on Saturday evening.

The 18-year-old could have quite easily lashed the ball home from a matter of inches, after Leroy Sane’s shot had crashed off goalkeeper Joe Day’s face and bounced towards goal.

There are few players in the City squad so capable with the ball in tight areas as Foden, so it would have been no problem to poke the ball over the line under no pressure.

Instead, he pulled his foot away, put both arms above his head and let Sane take all the plaudits.

Because it wasn’t about plaudits, it was about what was best for Manchester City. This was one of those old-school FA Cup games, against a stubborn side on a dog of a pitch, had been proving quite tricky for the Premier League champions.

Foden was onside but he was taking no chances; the most important thing for him was for City winning the match. No thoughts about a goal perhaps earning him a place in the starting line-up for next weekend’s Carabao Cup final or anything like that.

It was an act that summed up the attitude of a young player who is the focus of so much attention, who is often used as a stick to beat his boyhood club. With so many complaining about a lack of opportunities, his focus is simply on doing his job, even if that is letting others do theirs.

Besides, he helped himself to a double anyway. If the first non-goal summed up his character, then the two he did put away summed up his qualities as a footballer. 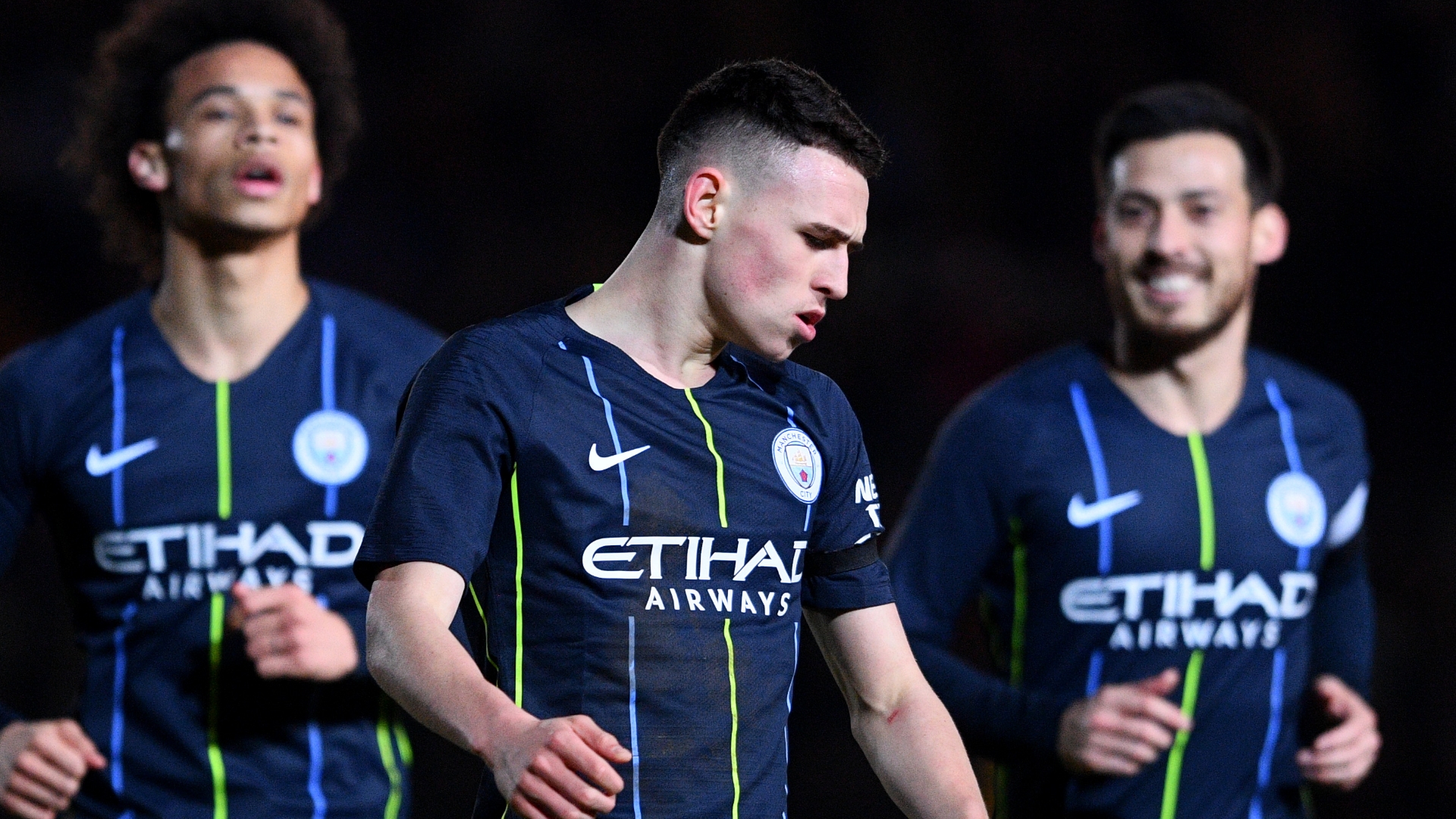 For his first, he picked up the ball on the halfway line, drove at the Newport defence and fired off a shot that suddenly dipped and thus outfoxed the possibly dazed Day.

His second was similar, and perfectly timed. Padraig Amond’s late lob had briefly threatened the unlikeliest of comebacks. Very briefly. Foden went down the other end, danced around some defenders and fired the ball high into the goal from the edge of the box.

Job done. Though there was still time for Riyad Mahrez, who has not had the best of times recently, to smack in City’s fourth in the last minute of stoppage time.

Yet this fifth-round tie was all about Foden. He is by far the City academy’s best hope of producing a footballer ready for the first team, not least because his old mates Jadon Sancho and Brahim Diaz have chosen to fly the nest.

Brahim always knew a loan was a possibility even after signing for Real Madrid but he went anyway, absolutely convinced that he would not get a chance at City.

Sancho’s messy departure is well documented (although the full story not entirely told) and his seemingly endless flow of fine goals and assists has served not only to push his price-tag up towards £100 million but to shine a brighter light on Foden, his game time and indeed lack of it.

He has not played in the Premier League since a six-minute outing when City lost at Chelsea at the start of December. He played 90 minutes and scored his first Etihad Stadium goal in the first round of the FA Cup but much was made of it when he started the next game, a home Carabao Cup tie with League One Burton, on the bench.

He ‘only’ – depending on your point of view – played 15 minutes in the fifth round against Burnley and has not made a Premier League squad for the past three games.

That run, amid Brahim’s exit and Sancho’s form, has led to fresh criticism of Pep Guardiola’s handling of one of English football’s finest talents.

The argument goes that he should be playing more games, or at least getting more minutes off the bench. 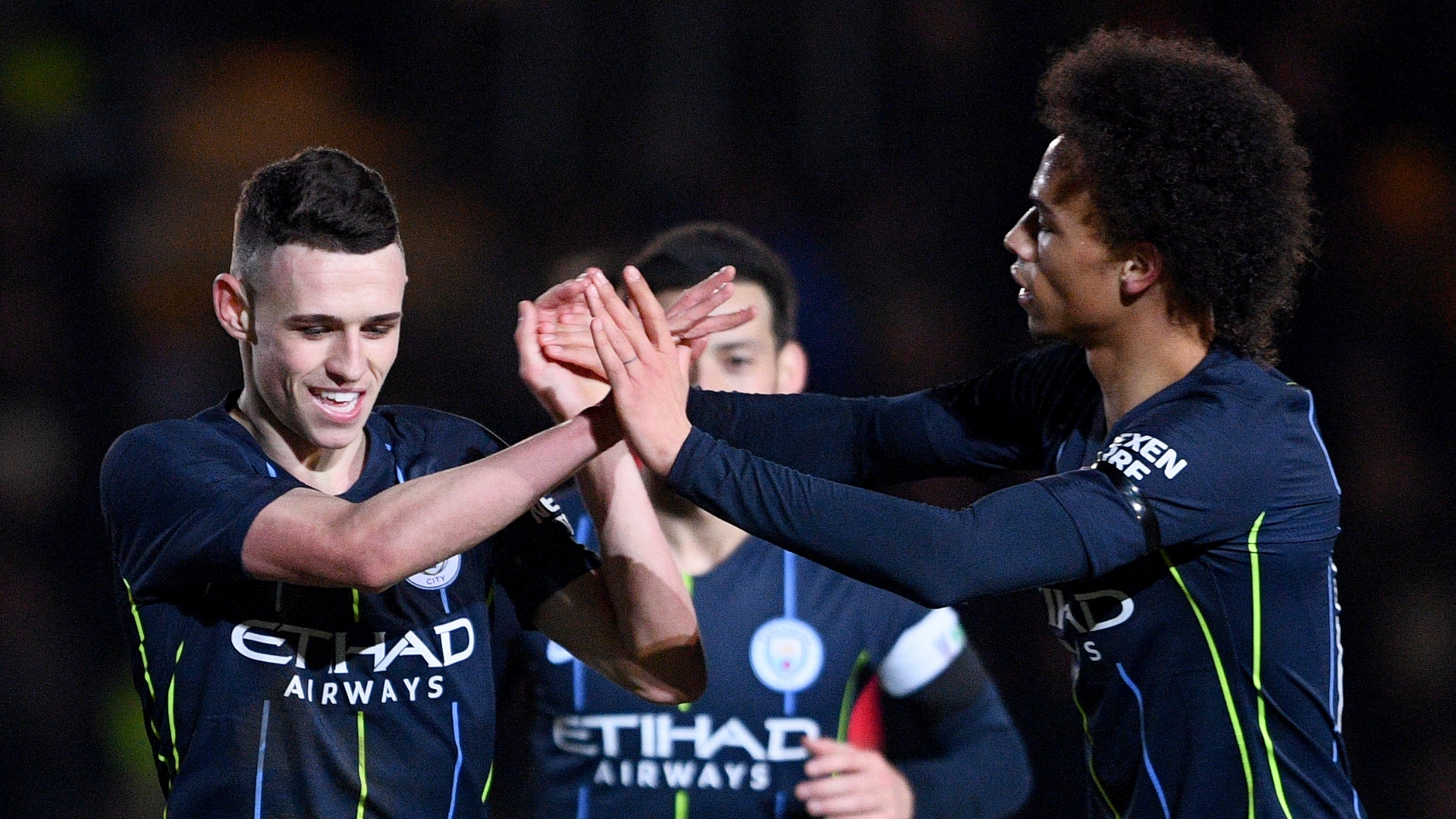 The harsh reality is that he has four midfielders ahead of him who could all get in the starting line-up at any other Premier League club in Kevin De Bruyne, Ilkay Gundogan and Bernardo and David Silva.

The other harsh reality is that Guardiola sees each of those four as a safer bet when it comes to the real business of winning Premier League matches.

That is one of the key differences between Foden’s situation and that of Sancho. The latter would simply not have had the kind of regular football he is currently enjoying had he stayed at City, given the consistent good form of Raheem Sterling and Leroy Sane.

His emergence goes to show what can happen when you trust youth but for various reasons that is not going to happen for Foden at City just yet. He will have to bide his time and wait for chances like Saturday evening.

He knows that, of course. He knows he will not be allowed to leave on loan, a move which could sharpen him up as a player, but not necessarily as a Manchester City player.

He believes the Etihad is the best place for him right now because he wants to make it at the Etihad. Where better to do that than by working closely with Guardiola, learning exactly what he wants and then doing it when he gets his chance.

Foden has now played 845 minutes for City this season, alongside some of the best players in Europe while learning Guardiola’s gameplan on the job.

How many other 18-year-olds can boast that much top-level football, not just in the Premier League, but around Europe?

Perhaps he would have played a bit more had he gone on loan, or even left the club altogether.

That has worked for Sancho, and he should be applauded for his bravery, but Foden has chosen another path.

It may not always make him the centre of attention, but he is doing things his own way. Just like when he rejected an easy goal in Newport.