?Eintracht Frankfurt have set their asking price for striker Luka Jovic with a whole host of clubs said to be interested.

The striker – who is currently in the second year of his two-year loan deal from Benfica – has been on hot form all season long, having bagged himself 15 goals and five assists in 23 Bundesliga appearances as well as seven goals in 10 Europa League matches this campaign, a very impressive feat for a player just 21 years of age. 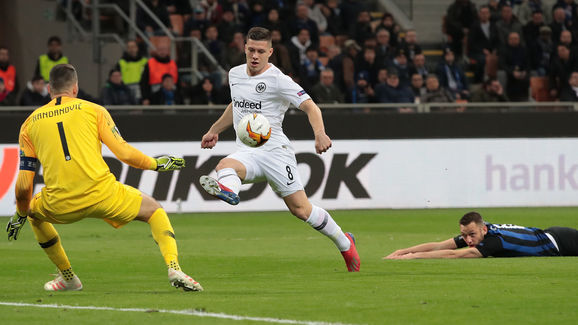 He’s helped Frankfurt up to fifth in the ?Bundesliga table and has helped them progress to the quarter finals of the Europa League, where they will take on his parent club Benfica for a place in the semi finals.

His impressive performances have naturally brought a surge of transfer speculation with them, and according to ?The Metro, Frankfurt have set £40m as their asking price for their prized possession.

One club who have been paying close attention to Jovic’s developing situation is ?Barcelona who are said to be very keen on the striker. The club sent representatives to Milan on Thursday night to see the Serbian international in action during Frankfurt’s Europa League clash with Inter, and they were not let down. Jovic struck after just five minutes, and that was all that was needed as the German side progressed into the next round and the Barcelona chiefs were treated to a solid performance from the front man.

The Catalans look set to pursue Jovic in the summer and with the price for his services now set, all that’s seemingly left is for Barcelona to pull the trigger on the move.