?Liverpool centre-back Virgil van Dijk has insisted he doesn’t feel nervous ahead of major games, as the Reds prepare for their Champions League final against Tottenham.

After narrowly missing out on their first league title in 29 years, Liverpool still have the chance to finish the season with silverware in the shape of the Champions League. They take on fellow Premier League side Tottenham at the Wanda Metropolitano in a week’s time in a bid to win the competition for a sixth time.

Despite the high-profile nature of the game, the PFA Player of the Year has revealed he doesn’t get nervous prior to these games and instead gets excited about being involved.

Asked if he feels nerves during an interview with ?The Guardian, the 27-year-old replied: “With experience, the nervousness is not there. When I made my debut for Liverpool against Everton [in January 2018] I was more excited than nervous. I surprised myself that day with my calm.

“It’s more excitement than nerves these days. Even before the ?Champions League final last year [against Real Madrid] I was not nervous at all. I was very relaxed. I was like: ‘Let’s go, let’s do this.'”

?Liverpool’s place in this year’s final looked unlikely, before a dramatic 4-0 win in their semi-final second leg over Barcelona saw them through 4-3 on aggregate. Despite the euphoria that night at Anfield, Van Dijk is now targeting finishing the job in Madrid. 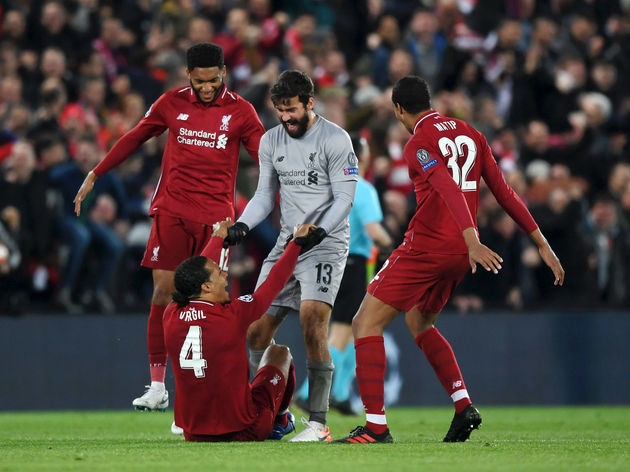 “It was nuts. You can’t really describe it. Hopefully we can finish it off now and make an even bigger memory.”

Winning the Champions League final next weekend would see Van Dijk win his first trophy as a Liverpool player since his £75m move in January 2018, with the chance to win major trophies a deciding factor in his move to Anfield.

“We were close in the Premier League – but now we have a chance to win the Champions League, the big one. We’re going to give it everything we’ve got.”