After a long wait, the ?USA finally got their World Cup campaign up and running on Tuesday night, as they annihilated a far inferior Thailand side 13-0.

The Americans were in control from minute one, but Thailand had clearly set out to frustrate their opponents and afford them as few clear cut chances as possible.

This plan looked shattered in the sixth minute when Alex Morgan thought she had given the US an early lead, but saw her tap-in ruled out for offside. But Alex Morgan did give the US an early lead at the second time of asking when she calmly headed in a delicately chipped cross from Kelley O’Hara. Despite two more first half goals from Rose Lavelle and Lindsey Horan, USA will have felt disappointed with just three goals at half-time.

They made up for wasted chances in the second half with an 11-minute flurry of four goals seeing them take their tally to seven before the hour mark. After a break of nearly 20 minutes without a goal, Morgan made it eight with a tidy turn and finish from the edge of the box.

Fan favourite and team captain Megan Rapinoe got in on the act just a few minutes later to make it 9-0, as fans were calling for USA to make it double figures. And they didn’t have to wait long as Morgan once again showed her class to make it 10-0. With every goal, you thought the Americans might take their foot off the pedal, but that was never the case. Three more goals before the end saw them take a ridiculous 13-0 win from their opening game.

As the most successful nation in the history of the women’s game, USA will always have expectation upon their shoulders when they play in the World Cup. 2019 was no different, and the ease with which they beat Thailand showed that pressure was no issue for this USWNT team.

It was evident early on that the US were far superior in every area of the pitch and they wasted no time in taking the lead, as just 12 minutes in, they were ahead. The 3-0 scoreline at half time flattered Thailand, and the US came out in the second half hungry for more goals and that’s just what they got.

Ten second-half goals saw the US score the highest amount of goals in Women’s and Men’s World Cup History. In what could have become an exhibition in which they strolled to a six or seven goal win, USA showed their professionalism by hunting for more goals. A trait which Jill Ellis will be delighted to see from her players.

Alex Morgan’s tally of five goals is a record-equalling tally in a World Cup game. After seeing her first effort ruled out for offside, her concentration never wavered, as just six minutes later, she successfully put her team 1-0 up with no assistant’s flag to stop her at the second attempt.

She grabbed her second of the game at the beginning of the second half, as the US began to embarrass their opponents. Morgan saved her best goal for her hat-trick goal when she fired into the corner after a neat turn on the edge of the box.

Whilst most strikers would have settled for just three, Morgan smelled blood and went on the lookout for more. She grabbed her fourth and fifth goals in the final ten minutes in a performance verging on bullying.

Facing the reigning world champions? in the first group game of the tournament was never going to be easy, so even before this defeat, Thailand would have been targeting points in their remaining two fixtures. That said, they will have been disappointed with how they started this game and gave themselves an uphill task early on.

There were questions over the Americans’ patience in games if they couldn’t find an early goal, and this Thai team will no doubt have been aware of the value of keeping the score at 0-0 for as long as possible. 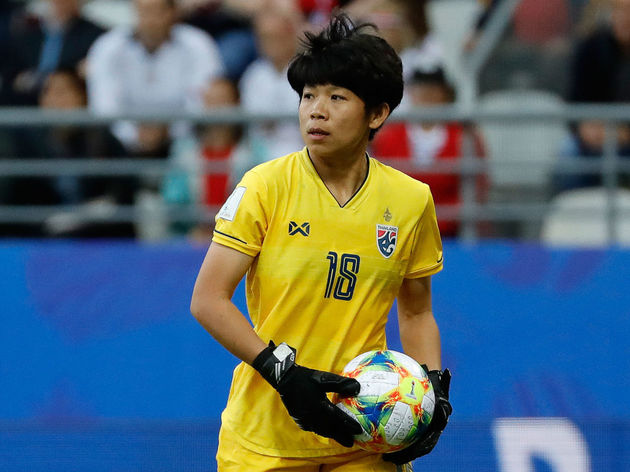 So when they found themselves 3-0 down after half an hour, they will have known that any hope of snatching a point was all but over. In hindsight, 3-0 at half time was a great scoreline and a repeat of that in the second would have been welcomed. However, USA’s ten second half goals may have knocked the confidence out of this hopeful Thailand team.

Not the easiest award to give considering the scoreline, but Kanjana Sungngoen did at times pose a threat on the right hand side with her pace. When the US were camped in the Thailand half, Sungngoen was often the outlet for her side to get a breather and work their way up the pitch. 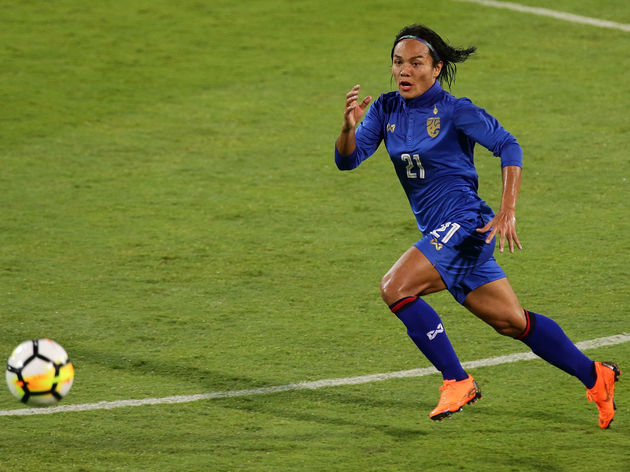 Unfortunately she would find herself with few team mates around her when she did break, but did well winning throw-ins and free kicks, enabling her team to play for territory when under the cosh.

When Thailand face less fearsome opposition, Sungngoen will play a more pivotal role and will look to link up with star striker Miranda Nild and pose a more prominent threat to the opposing goal.

USWNT continue their World Cup campaign on Sunday evening when they face Chile in the second of their Group F fixtures, hoping to carry on their fine goal scoring form from this game.

Thailand will be looking to bounce back on Sunday in a tricky fixture against a solid Sweden side. Another defeat would see their hopes of remaining in the competition hanging by a thread.