?Talk of West Ham and Newcastle’s interest in West Brom

Following the departures of Andy Carroll and Lucas Perez, as well as doubt over the futures of Marko Arnautovic and Javier Hernandez, West Ham desperately need to strengthen in attacking positions. Savarino could be just the man they’re looking for. Here’s everything you need to know about the South American.

He’s Had Plenty of Game Time Savarino started his playing career in his home nation with Venezuelan side Zulia and had a four-year spell at the club between the years 2013 and 2017.

During his time there, he scored 32 goals but perhaps more impressively made an astonishing 132 appearances.

His most prolific season came in 2016 when he scored 18 goals, and looked to be continuing his fine form into 2017, scoring six goals in 11 games before making a loan move to Real Salt Lake. 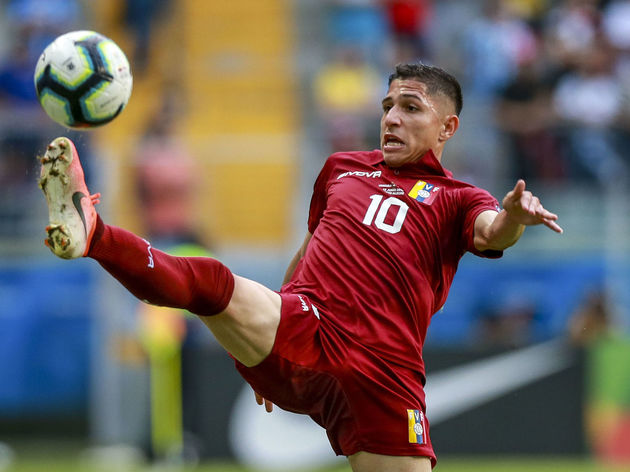 Despite still only being 22 years old, Savarino has already teamed up with Salomon Rondon for Venezuela’s first team.

Unfortunately, he hasn’t been able to add to his goal tally so far in the competition, with Venezuela playing out two goalless draws against Peru and host nation Brazil, leaving them requiring a win against Bolivia to have any chance of progressing. Following Newcastle’s purchase of Paraguayan winger Miguel Almiron, a number of similarities have been drawn between him and their potential new target Savarino.

It’s not just their similar stature or because they’re both South American, but the fact that Almiron was also recruited from Major League Soccer previously playing for champions Atlanta United.

Almiron is currently Newcastle’s record signing and has impressed during his short time at the club, so their fans will be optimistic that Savarino would have a similar impact if a potential deal was completed.

His Style Is Very Different to Other West Ham Targets Having already touched on Manuel Pellegrini’s desire to strengthen West Ham’s attack, it’s safe to say that they have been looking for a very specific type of player.

Links with the likes of Rondon, ?Fulham’s ?Aleksandar Mitrovic and Celta Vigo forward Maxi Lopez hint towards their desire for a big, bullish target-man to replace the departed ?Carroll.

Savarino certainly doesn’t fit this description, standing at just 5’7 and regularly playing out wide rather than down the middle.

His current manager at Real Salt Lake Mark Petke has described him as a skilful individual who draws fouls because opponents cannot cope with his dribbling ability.

He Could Be Available for Just £6m Perhaps because he is still fairly unknown, Savarino could come pretty cheap with a rumoured fee of just £6m being ?mentioned.

Therefore, it’s no surprise he’s attracting Premier League attention with ?West Ham and Newcastle set to battle it out for his signature.

But Newcastle might consider themselves to be in pole position to snap up the tricky winger for a number of reasons. ?Magpies

The prospect of potentially joining Venezuela teammate Rondon at club level – if he too makes the move – might also be an attractive idea to Savarino.