?FIFA 20 is almost upon us, so it’s time for fans to start thinking about which team they are going to aim to put together first.

Of course, we all dream of building a team full of icons and superstars, but that’s almost impossible at the start of the game, when coins are certainly at a premium. If you’re looking to pinch pennies, look no further. 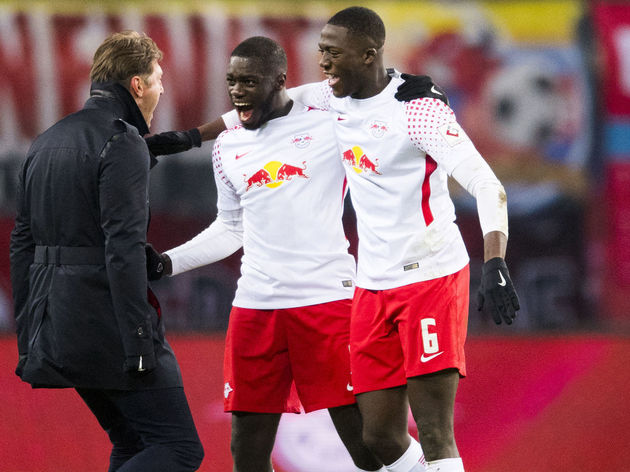 Alban Lafont (GK) – In goal is young Nantes wonderkid Lafont, who has moved away from the ?Serie A this season. A 79 overall, the Frenchman stands at 6’4 and boasts 83 reflexes, which sounds like a fantastic combination.

Kevin Malcuit (RB) – Next up is ?Napoli’s Malcuit, who enjoyed somewhat of a breakout season last year. He has earned an upgrade to 78 overall, and his 85 pace and 74 defending is more than good enough for a starter team.

Dayot Upamecano (CB) – Perhaps the best part of this side is the perfect link at centre-back. RB Leipzig have some incredible young defenders, of which Upamecano is perhaps the best known. His 80 physical and 76 pace will bully almost any striker on the game.

Ibrahima Konate (CB) – Lining up alongside Upamecano is teammate Konate, who is one of Europe’s most exciting defenders. His 79-overall card reflects that, but his stats look like they should belong to someone far better. Get him while you can, because he’s going to be popular.

Achraf Hakimi (LB) -? We need a ?Bundesliga left-back to make things work, and ?Borussia Dortmund’s Hakimi looks like he will do a fine job. His 92 pace is his standout stat, and his 80 dribbling will make him a versatile weapon as well. Abdoulaye Doucoure (CM) – Moving into midfield, we’ve gone for a bit of a hybrid here. On the right in the 4-3-3 is ?Watford powerhouse Doucoure, who boasts over 70 in all of his stats apart from pace, which sits at 69. He can do it all, which is crucial in the early stages of the game.

Josuha Guilavogui (CM) – Anchoring the midfield is Guilavogui. A FIFA hero, the Frenchman’s pace has taken a bit of a dive to sit at 59, but the rest of his defensive stats are still elite. If you want someone to recover possession, he’s your man.

Weston McKinnie (CM) -? He’s gold! McKinnie is finally a gold, and it is well deserved. The USA wonderkid has been hugely impressive for ?Schalke, and actually looks to have a phenomenal card. At 6’1, McKinnie has some well-rounded stats, and he looks capable of making a real impact early on. Jean-Philippe Mateta (ST) – Mateta was a revelation for Mainz last season, and his upgrade to 78 overall looks incredibly enticing. He is 6’4 with 82 pace, and his 75 shooting makes the Frenchman one of the best cheap strikers.

Leon Bailey (LW) – Finishing off the team is Bayer Leverkusen winger Bailey. Always deadly in any FIFA, the Jamaican’s pace (91) and dribbling (84) will make him a nightmare for most starter defenders, and his four-star skills will also be fun to play with.