Yes, they’ve all probably been belittled and ridiculed by José Mourinho in one way or another, but that’s not the answer we’re looking for. What’s that at the back of the room?… Yes! JohnTerryLover26 takes the prize! All seven players have scored both for and against Chelsea at Stamford Bridge in the Champions League. An elite and obscure list.

In honour of Blues legend Rémy writing his name into the club’s history books on Tuesday night, 90min takes a look back at the careers of this prestigious group of former Chelsea stars.

Although ?the Blues didn’t lift any trophies during the Cameroonian star’s time at the club, he did bag a crucial Champions League goal at home in the round of 16 against Galatasaray. Mourinho’s men progressed to the semi-finals that year, where they were finally knocked out by Diego Costa’s ?Atletico Madrid. More on that one later.

It was his goal against Chelsea at Stamford Bridge which carried much more significance, however. Eto’o was part of Mourinho’s 2009/10 ?Inter side, which as we all know, didn’t amount to much…

Okay, so they actually won a famous treble and Eto’o scored the late goal which sank the Blues at Stamford Bridge in the round of 16, tearing away from Branislav Ivanovic to fire cooly beyond Petr Cech.

A monumental goal in a record-breaking season for I Nerazzurri.

It’s painful to look back on Fernando Torres’ time at Chelsea. Yes, he lifted the Champions League with the Blues and made Gary Neville lose control of his bodily functions at Camp Nou, but overall, his spell at Stamford Bridge was a miserable affair from start to finish.

appearancesclub, and he eventually left the Premier League to rejoin Atletico Madrid. 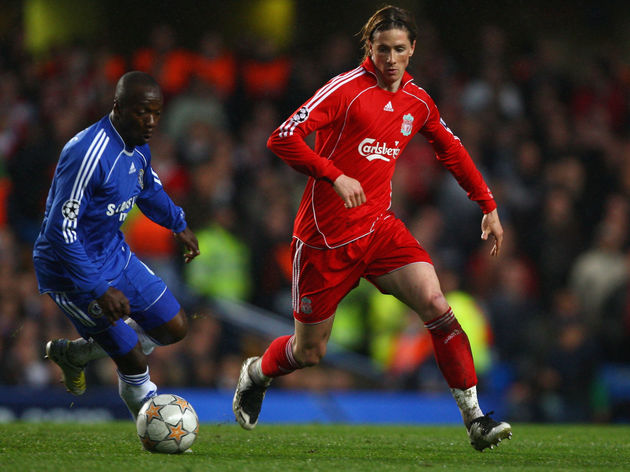 But Torres was once a regular thorn in Chelsea’s side, and the former ?Liverpool star scored a vital goal in the 2007/08 Champions League semi-final at Stamford Bridge, which took the match to extra-time.

Chelsea snatched the win during the additional 30 minutes, setting up John Terry and co for a teary night in Moscow.

Hard man. Cult hero. Complete nutter. Call him what you like, but for three years, ?Diego Costa was a Chelsea legend.

A two-time league winner with the Blues, Costa bullied his way to 58 Premier League goals for the club?, until his eventual fall out with coach Conte meant that the Spaniard was sent packing back to Madrid. During the season before Costa arrived in England, he was a key figure in Atleti’s Champions League charge, which ultimately ended in last-gasp final heartbreak against ?Real Madrid.

The live-wire made himself very well-known to Blues fans during that European campaign, scoring the decisive penalty at Stamford Bridge, which put the victory out of Mourinho’s reach.

What a fantastic player this man was. Michael Ballack was a huge part of Chelsea’s midfield for a number of seasons, and he was one kick away from Champions League success in the 2008 final defeat to ?Manchester United. Ballack did spend four years at ?Bayern Munich too, where he scored a late penalty for Der FCB in a 4-2 defeat to Chelsea ?in the Champions League quarter-final back in 2005. The score ended 6-5 on aggregate following a dramatic second leg in Germany.

That’s right – Chelsea were mad enough to sign ?David Luiz twice. In fairness to the barmy Brazilian defender, he did have some good spells at Stamford Bridge, and he was known to pop up with an important goal or two, in amongst all the gaffes. Back in 2015, Luiz returned to the Bridge to haunt his former club with Paris Saint-Germain, scoring a late header to force the match to extra-time, where the French side eventually triumphed over the hosts.

Luiz apologised after the final whistle for his wild celebrations, but all was forgiven when he returned to the club in 2016 – until he later moved to ?Arsenal, of course. Chelsea met Shakhtar back in 2012 in the Champions League group stages, and the English side claimed a 3-2 victory over a star-studded team which included ?Fernandinhoconvinced

After a scintillating loan spell at ??Newcastle United, Chelsea splashed the cash on QPR striker The Frenchman returned to haunt his former employers on Tuesday night however, as he bagged what turned out to be a consolation strike for Lille in their Champions League group match.

It meant the Blues’ final ten minutes were nervier than planned, but their ex-flop couldn’t stop Lampard’s progression to the knock-out rounds.

Rémy did succeed in carving his name alongside a list of superstars to have achieved this impressive feat however, and he has now become the forgotten man in the next annual football trivia quiz.