It was another pulsating evening of Champions League football on Tuesday as teams looked to secure their places in the knockout stages of the competition.

?With Barcelona already having secured top spot in Group F, manager Ernesto Valverde decided to heavily rotate his lineup for the clash with Inter.

I spoke to his first coach in Spain earlier this season about just how good he was, learning to play with socks and setting himself up for bicycle kicks… @90min_Football ?https://t.co/xsbM8UpLtl

The match appeared to be heading towards a draw until Ansu Fati netted the winner just one minute after entering the field. This strike saw him become the youngest goalscorer in Champions League history, having only recently turned 17.

So, following the teenage sensation’s stunner for Barça, 90min walks you through the youngest players to score in the Champions League… Back in his early days with the club, the attacking midfielder came on as a substitute to fire in a ferocious strike to make sure of the win for the away side – the game eventually ending 5-2.

Although he has been struggling for minutes at Juventus this season, he does have a goal to his name in the Champions League. He poked home a Cristiano Ronaldo strike on the line to leave the Portuguese irate.

Was it worth it, Aaron? Aged just 16, Embolo scored four minutes into his Basel debut. There were high hopes for him and he carried his fine form into the Champions League, where he netted an expertly taken goal before setting up the third against Ludogorets. The game ended 4-0.

It appeared as though Embolo wouldn’t go on to fulfil his true potential however, due to a serious injury sustained back in 2016. But, he has since overcome his injury struggles and is excelling for Martin Klein takes up his place in this list thanks to his headed goal against Panathinaikos. His goal reduced the deficit, but the game, ultimately, ended 2-1.

Two weeks later, he started the game against Real Madrid, with Petr Cech in goal behind him. It’s safe to say they went on to have slightly different careers, however. 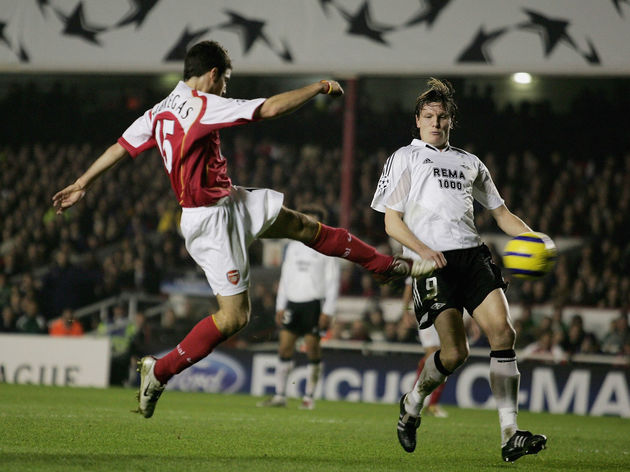 An exceptional midfield talent and although he may have been young, the Spaniard had already built up a reputation.

The Gunners swept aside Rosenborg 5-1 in the ?Champions League, with Fabregas scoring the third. He controlled the ball before flicking it past his man and finding the net with a left-footed finish.

The result helped put Arsenal into the last 16 of the competition, but this was as far as they got as Bayern Munich knocked them out.

This wouldn’t be the last time that this happened. Not at all… Bojan appeared to be the next supreme talent to come out of La Masia, with the forward ?being labelled the ‘new Messi’ in his early years.

The Spaniard tapped home the only goal of the game against the Germans and although he continued to impress in the early parts of his career, he eventually departed. Bojan went on to play for Stoke before joining MLS side Montreal Impact. Dinamo Zagreb were absolutely embarrassed during the 2011/12 group stages of the competition. In their six games, they scored three times and conceded a whopping 22.

One player who did find the back of the net was a young Mateo Kovacic. In fact, his strike gave Zagreb the lead over Lyon…but, it didn’t stay like that for long. The French side came back to win 7-1.

Kovacic is now at ?Chelsea and following a slow start to life at the club, he has now settled and is shining. The midfielder helped the Blues ?secure their place in the last 16 of the competition on Tuesday as they overcame Lille.

Peter Ofori-Quaye etched his name into the history books as he came off the bench to score a sublime goal for Olympiacos aged just 17 years and 195 days.

With his side 4-0 down, he came on and it took him just nine minutes to pull one back for the away side. As he received the ball, he shifted it quickly before firing a shot into the bottom corner. Unfortunately for him, he was unable to celebrate, instead racing to pick up the ball and charging back towards the halfway line.

Ofori-Quaye went on to score just the three goals in the Champions League, appearing 30 times. However, he did play at the 2000 Africa Cup of Nations for Ghana. The striker was released by Ansu Fati once again showed on Tuesday why he is being touted for greatness.

Aged just 16 years and 318 days, the ?Barcelona teenager became the youngest ever player in La Liga history to score and assist in the same game in his first career start. In that game, it took him just two minutes to find the net.

Well, on this occasion, it took him just the one minute as he come on as a substitute in the 85th minute before firing in a stunning winner just seconds later. As a result, he became the youngest goalscorer in the competition, aged just 17 years and 40 days.

Oh, his goal also knocked Inter out of the competition.

The youngster’s potential is scary.