Dortmund new boy Erling Haaland started his career in Germany with a hat-trick last weekend, and Die Borussen fans ?will be eager to see him in Bundesliga action against FC Köln on Friday night.

The 19-year-old, recently signed from RB Salzburg, came off the bench to score three goals in 20 second-half minutes to help Dortmund seal a 5-3 comeback win away at Augsburg. Haaland will be full of confidence and itching to make his first ?Dortmund start in front of the infamous yellow wall when his side entertain FC Köln at the Westfalenstadion.

Lucien Favre’s men are in need of Haaland’s firepower if they are to close the gap on ?Bundesliga leaders RB Leipzig, who sit seven points ahead of them.

As for the visitors, Markus Gisdol’s team occupy 13th place in the table, only three points above the relegation places, but did record an impressive 3-1 home win over Wolfsburg last time out.

Boss Favre will no doubt contemplate promoting Haaland from the bench to the starting XI after the Danish striker’s match-winning turn against Augsburg. However fellow Dane, Thomas Delaney remains sidelined with an ankle injury that he suffered whilst on international duty against the Republic of Ireland in November.

Whilst, defender Marcel Schmelzer missed the win over Augsburg and is unlikely to be fit to play any part on Friday evening and Dan-Axel Zagadou is also an absentee from the hosts’ backline.

There are no such problems for visiting coach Gisdol, who has a full complement of players to choose from ahead of his side’s trip to the Westfalenstadion.

The sides faced each other in the second game of the Bundesliga season back in August and, on that occasion, Dortmund recovered from a goal down to claim victory with a 3-1 away win. FC Köln had taken the lead through Dominick Drexler midway through the first half and Gisdol’s men held onto their advantage until the latter stages of the match.

But with 20 minutes remaining, Jadon Sancho put the visitors back on level terms, before defender Achraf Hakimi nudged them in front and Paco Alcácer then sealed the points deep into stoppage time.

Both sides returned from the Bundesliga break with confidence-boosting victories last weekend, but the teams suffered mixed fortunes prior to the winter sabbatical. 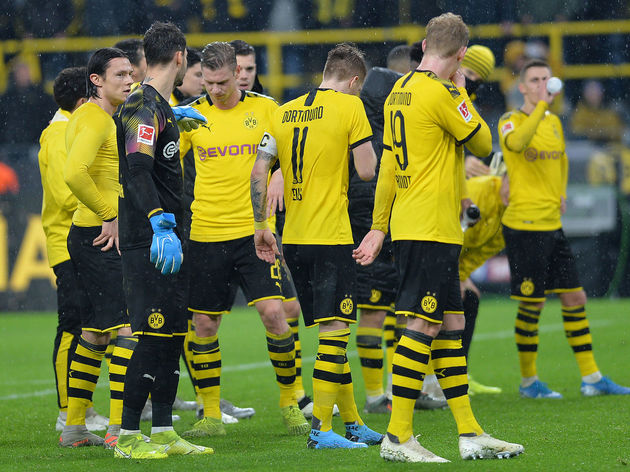 In their two games before the interval, Dortmund lost 2-1 away to eighth-placed Hoffenheim and let a 2-0 lead slip at home to leaders Leipzig.

Die Borussen have suffered from defensive frailties so far this campaign and their conceding of 27 goals is the worst record of the top nine teams in the Bundesliga.

Meanwhile, Koln had won all three of their league games prior to the winter break. Their most notable result was beating Leverkusen 2-0 at home, a team who sit seven places above them in the standings.

After Köln’s latest result against Wolfsburg, they now can lay claim to four league wins in a row, impressive from a side who have been towards the lower echelons of the table all season.

Here’s how the two teams have fared in their last five competitive fixtures.

In spite of the visitor’s purple patch, with red-hot Haaland at Dortmund’s ?disposal, it appears that win number five will be out of FC Köln’s reach. Dortmund’s attack was already incredibly potent, and when Sancho, Marco Reus and Thorgan Hazard are all singing from the same hymn sheet, they are a nightmare for any side.

Throw into the mix a natural-born goalscorer and Dortmund look set to be a serious threat in both the ?Champions League and Bundesliga in the second half of the campaign.

There will no doubt be goals in this one, at both ends, Köln are free-scoring and Dortmund love to concede but those in yellow and black will come out with the spoils.