?Wolverhampton Wanderers saw plenty of good chances go to waste as 10-man Leicester City held on for a 0-0 draw at Molineux on Friday.

The game began at a frantic pace. Leicester dominated possession, but it was Wolves who had the edge when it came to shots. Raúl Jiménez and Pedro Neto both came close to scoring, and Wolves thought they had made the breakthrough with a Willy Boly header shortly before half time, only for VAR to rule the goal out for a marginal offside. Just like the first half, the two teams played with real energy and created a handful of opportunities after the break, but there were few clear-cut chances. The biggest event came after 75 minutes as Hamza Choudhury was sent off for two yellow cards, leaving Leicester a man light in midfield.

It seemed as though Wolves would snatch the win in added time when Jiménez leapt to meet a corner, but his unopposed header somehow flew wide of the goal, so both sides had to settle for a point. Nuno Espírito Santo took a pretty big risk in this one by resting both Adama Traoré and ?Wolves

Have we ever played good without moutinho

The absence of Moutinho was felt a little bit more, with Leander Dendoncker struggling to match his creativity. Rúben Neves did his fair share, but Nuno will probably try and keep Moutinho in the side going forwards. Oh, how Wolves have missed Willy Boly. The centre-back lost the majority of the season so far through injury, but he now looks to be back to his best.

Boly was a dominant force against ?Leicester. Anything that came his way was headed clear with relative ease, and he worked tirelessly to keep Leicester’s attackers at bay once they grew into the game.

Boly the biggest man this side of Hulk Hogan

Willy Boly joining the exclusive group of footballers who must be referred to by their full name at all times.

He was unlucky to see his goal ruled out for offside, given the infringement came far earlier in the move, but a second consecutive clean sheet will still be a nice reward. The poor run goes on. Yet again, Leicester dominated possession but showed very little in the final third, and they can have few complaints about the scoreline here.

It would be an exaggeration to suggest that Jamie Vardy’s form has turned into a problem, but the striker was again nowhere near good enough here. He looked completely isolated and could not get onto the ball. You could probably count his total touches on one hand.

It wasn’t just Vardy who disappointed. None of Leicester’s forward line looked up for this, and Brendan Rodgers needs to figure out why. This run cannot go on for much longer. 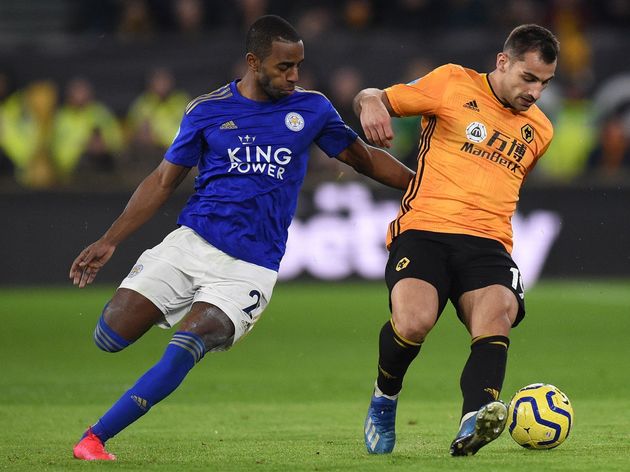 Leicester were by no means good enough at Molineux. The Foxes’ forwards struggled to create anything, leaving right-back Ricardo Pereira to try get the job done.

The Portugal international was his typically adventurous self, bombing down the right side, with and without the ball, to try and create opportunities. He managed a few impressive runs into the penalty area, but always seemed to lack the end product.

Ricardo Pereira is class. Everytime I watch him he impresses me.

Defensively, Pereira was shaky at times, getting caught out too far forward, but he didn’t do too much wrong.

Wolves will now turn their attention to the Europa League, with Espanyol set to visit Molineux on Thursday for the first leg of their knockout clash, but they will then come back to domestic action against ?Norwich City.
As for Leicester, their next test comes in the shape of ?Manchester City, who will be eager to restore some positivity after they were banned from the ?Champions League for two years. Did you hear about that?