?The suspension of football due to the coronavirus pandemic is absolutely necessary, but also totally heartbreaking for all die-hard fans of the game.

At this point, an international friendly, contested live from the depths of parts unknown, would be enough to feed our addiction.

With Borussia Dortmund tangled in a three-horse race for their first Bundesliga title since 2012, fans can only hope that the season will resume and play out in their favour. In the meantime, there’s a multitude of older matches for the Yellow Wall to rewatch and reminisce while we all wait patiently.

With that in mind, here are nine Dortmund matches for fans to sit back and rewatch during the football hiatus… Some rivalries are fuelled by geographical boundaries, others by political allegiances, but Der Klassiker makes its name in Germany purely because of the unrivalled ability of Borussia Dortmund and Bayern Munich as the two powerhouses go head-to-head.

The sides met in a clash of titans in 2012 at Berlin’s Waldstadion, with the DFB Pokal at stake. In an action-packed, high-scoring game that saw two penalties awarded, young Dortmund striker Robert Lewandowski silenced any signs of a Bayern comeback and bagged a magnificent hat-trick, complimented by further goals from Shinji Kagawa and Mats Hummels.

His three goals nullified the efforts of Franck Ribery and Arjen Robben and secured a domestic double for BVB, who also claimed the Bundesliga that season.

Unfortunately for Dortmund, it seems to be a convention at this point that any player who rises to the top of the Bundesliga must inevitably sign for Bayern Munich. No prizes for guessing where Lewandowski, among others, ended up. It’s nothing short of heartbreaking that Dortmund didn’t win even more during the Jurgen Klopp era.

Despite the sadness of missing out on some silverware, their run in the Champions League that season was magnificent. It was made even better by the emotion of advancing to the semi finals through a last-minute, injury-time comeback against Malaga in the second leg of the quarter final.

The tie was a stalemate at 1-1 until the 82nd minute, with no goals scored in the first leg. So when Eliseu scored what should’ve surely been the winner for Malaga, it looked over for Klopp’s side. However, in an incredible turnaround, Marco Reus and Felipe Santana flipped the game on its head with two stoppage-time goals to send BVB through.

In the words of wrestling great Scott Steiner, the numbers don’t lie, and they spell disaster for you, Malaga. The 2006/07 Bundesliga season was admittedly a disappointing one for Die Borussen, but this result capped the campaign off in a much better way.

It’s May 2007, and Schalke need a win to clinch the Bundesliga title. Standing in the way of that triumph was a trip to Signal Iduna Park for the Revierderby; one of football’s greatest rivalries.

Dortmund, now under the control of their third manager that season, were resigned to a disappointing ninth-placed finish. The only thing that could make the season worse was a derby day defeat that allowed their rivals to lift the league title.

However, goals from Alex Frei and Ebi Smolarek salvaged some joy as BVB dismantled their rivals and spoiled their party, consigning Schalke to second place. Another Revierderby special, though this time Dortmund’s first clash with rivals ?Schalke in the 2008/09 season looked set to end in disaster. BVB were 3-0 down at the end of the first half in new manager Jurgen Klopp’s first derby with the club.

However, a Neven Subotic header and a goal from star man Frei put Dortmund back in the game at 3-2, before Frei grabbed his second in the dying embers with a penalty, crowning an incredible comeback.

While Dortmund didn’t win the game, they had no right to make that comeback from 3-0 down, and the chance to look back at where it all started for Klopp is always a welcome one.

Dortmund’s only Champions League triumph to date remains their incredible campaign in 1997.?

Knocking out English champions Manchester United out on their way to the top, Dortmund made up for a third-place finish in the league by dismantling a star-studded ?Juventus side in Munich’s Olympiastadion.

Dortmund took a shock 2-0 lead against the defending champions through Karl-Heinz Riedle, before Alessandro Del Piero brought Juve back into the game in the second half. But just as things were getting close for Dortmund, 20-year-old substitute Lars Ricken struck home their third with 20 minutes to play.

Dortmund hanged on, toppling the Italian giants to win their first and only Champions League. They did it in a magnificent kit, too. From one cup final to another, the stakes were at an all-time high when Dortmund edged out Frankfurt in the 2017 DFB-Pokal final.

Prior to this victory, Dortmund had lost an agonising three cup finals in a row, a record any club would be desperate to shake off.

An early Ousmane Dembele strike was cancelled out when Ante Rebic levelled things for Frankfurt half an hour in, but an audacious chipped penalty from ?Pierre-Emerick Aubameyang in the 67th minute eventually saw Dortmund home. 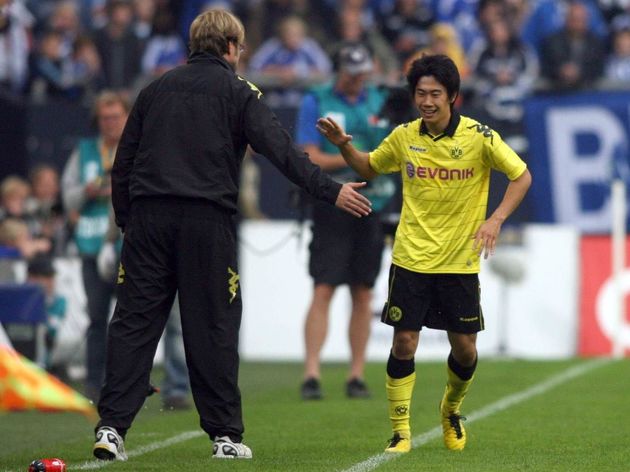 Everyone loves a good derby, so here’s one more for good measure.

The 2010 Revierderby was a successful one for Klopp’s Dortmund, breezing past Schalke in fine fashion at the Veltins Arena.

Kagawa bagged a brace in his first Revierderby before Lewandowski piled on the misery for Schalke as Dortmund stormed clear of their rivals. Klaas-Jan Huntelaar added a last-minute consolation for Schalke, but it was never enough to stop a Dortmund side that went on to win the Bundesliga that season. After edging out Malaga in the quarter finals, Dortmund faced a mammoth semi-final against ?Real Madrid?.

In the first leg, they made the most of the home advantage as Lewandowski continued to establish himself as one of the best strikers in Europe. He put all four goals past Madrid in fine fashion, making a second-leg comeback virtually impossible for Los Blancos.

Dortmund advanced to the final where they met Bayern Munich, and while they didn’t win, fans can look back at their 2012/13 season and marvel at their squad. 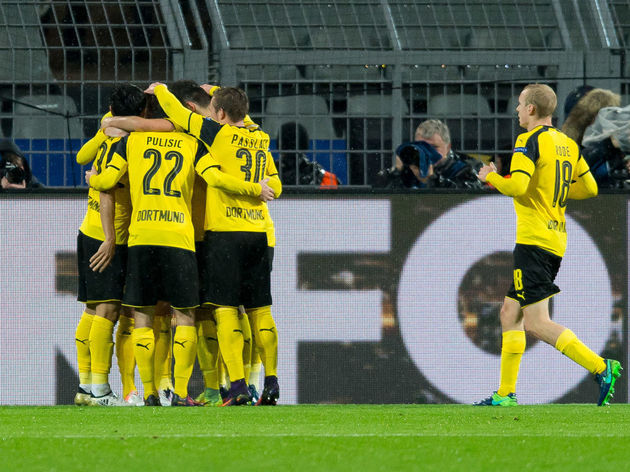 This game was so crazy that it’s too hard to do it proper justice. Just go check out the highlights.

The last time they met in the Bundesliga at Signal Iduna Park, it was an instant Klassik ?? pic.twitter.com/9aLdYfG3LS

To prove that football truly is ageless, our final offering is a modern classic from the 2018/19 season.

In a five-goal thriller, Dortmund went behind ?after 25 minutes when former player Lewandowski scored a header to put his side in front. Club captain ?Marco Reus, who has had to wave goodbye to every player who’s left for Bayern Munich in recent years, put Dortmund back in it at the start of the second half.

Not long after, however, Lewandowski bagged again and Dortmund fell behind. Reus clawed Dortmund back into the game once more, converting a penalty, before Paco Alcacer came off the bench to score the winner for Dortmund, sinking their rivals in an end-to-end contest.

The result was a huge one at the time; the win put Dortmund seven points clear of Bayern at the top of the table. Despite not hanging on to win the ?Bundesliga that season, the game remains one to go back and rewatch.