Micheal Keaton is starring in Batman Returns, Lionel Richie is top of the UK album charts (for a long time…a really long time), John Gotti has been sentenced to life in prison (also a long time), Euro Disney has just opened, and Paul Gascoigne is all set to sign for Serie A side SS Lazio.

Still relatively fresh off the back of at breakout Italia ’90 with England, and slightly fresher off the back of a cruciate ligament tear at the tail end of the 1991 season, Gazza arrives in Serie A as the hottest property in world football – signing for a then British record fee of £5.5m. And as host of cult 90s show ‘Golazzo: Football Italia’ James Richardson – in a recent exclusive interview with 90min – attests, the memories of Gazza lighting up Italia 90 and the hefty price tag led to equally hefty expectations being placed upon the Geordie’s shoulders:

“I think they were really expecting him to be their Maradona, something like that.”

This was in no way an exaggeration by Jimbo. After years of underperformance in ?Serie A, Le Aquile had signed Gazza as a saviour; t

Sergio Cragnotti believed this would be the case, as did the thousands upon thousands of Lazio’s fans who converged at Fiumicino airport to welcome their new hero.

“When you look back at the first days he had in Rome, they’re wonderful scenes in the documentary of his arrival at Fiumicino the way the fans were reacting.

“The fans fell for him in a way, not just Lazio fans as well, even Roma fans used to come up to him or at least shout encouragement to him which is really, really unusual for a player for the other team in that very bitter crosstown divide.” 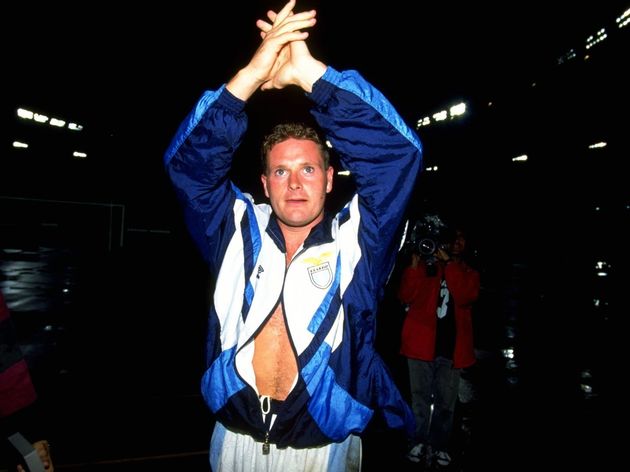 There were moments, particularly in his first season at Stadio Olimpico, in which Gascoigne looked like that player, that saviour, that (whisper it) Maradona.

There was the winning goal in the Rome derby, the goal against Juventus, and a Maradona-esque solo goal in the Coppa Italia against Pescara.

But…that was it really.

As James Richardson told 90min, despite these brilliant moments, Gascoigne was never able to string a these moments together and become the star the Le Aquile fans had craved:

“For a variety of reasons, some tactical but I think mostly fitness it never got to those levels.

We had flashes: an extraordinary goal in the cup, there was the header in the derby. There were great moments, but unfortunately fitness didn’t allow him to do everything they’d hoped and he hoped.” After three short seasons of the odd goal, the odd great bit of skill, and copious amounts of injuries and off-field debacles, Gazza would leave Lazio with a whimper in 1995.

However, despite being a rather disastrous move for both Gascoigne and Lazio, the England legend’s move to the peninsula would prove to be a brilliant one for UK football fans.