?Manchester United play Manchester City on Wednesday evening in a must-win game for both sides.

If Ole Gunnar Solskjaer’s men do come out on top, not only will they have boosted their chances for Champions League football next season, they will have also handed the initiative to arch-rivals Liverpool in their title fight with City. This has led to split loyalties from both camps, with some ?United fans wishing their team to lose, as they see a title-winning ?City as the lesser of two evils. Whereas ?Liverpool fans will find themselves in the peculiar position of wanting bitter rivals Man Utd to win.

Liverpool legend and Sky pundit Jamie Carragher weighed in on this sentiment when he donned the Red Devils jersey on Sky Sports’ Monday Night Football.

United manager Solskjaer – a Red Devils legend himself – will not want to see Liverpool equal Man Utd’s record of 20 league titles, so it will be interesting to see the tactics he deploys for Wednesday’s clash, as well as how motivated his players appear to be against . However, the Norwegian cannot afford too many more slip ups after his side were embarrassed in a woeful 4-0 defeat to ?Everton at the weekend. With City in imperious form, it will take a brilliant performance from the home side to take anything away from their Manchester rivals. If they fail to take all three points, Carragher may find himself in the ?Burnley club shop soon, as the Cityzens face a tough trip to Turf Moor at the weekend.

19-year-old Felix has emerged as one of Europe’s premier new talents this season and underlined his enormous potential with a recent hat-trick in the Europa League. It has already been reported that Benfica have rejected a €75m offer from Juventus, while there is even speculation that Paulo Dybala could be cut loose to make room.

According to Portuguese newspaper A Bola, Manchester City, Paris Saint-Germain and Real Madrid have all ‘requested information’ on Felix in addition to Juve’s interest.

Juve are said to want to provide Ronaldo with ‘good company’ as they look to strengthen and finally end their long Champions League trophy drought. The Italians were apparently initially unwilling to spend more than €100m in their pursuit of the teenager, but that may have changed.

Felix is believed to have a €120m (£104m) release clause in his current Benfica contract. It seems unlikely that Juve would genuinely feel the need for Ronaldo to ‘approve’ potential signings or allow a single player to influence transfer policy, but it has been often been reported as such, dating back to his time at Real Madrid, and similarly for Lionel Messi at Barcelona.

There is plausibility that Juve would at least target players Ronaldo likes and would complement him given that he is the €100m centrepiece of their Champions League ambitions.

But the idea that Ronaldo ‘demands’ certain players and has his own ‘transfer wishlist’ that includes Felix and ex-Real teammates Raphael Varane and Isco, as Italian publication Corriere dello Sport has reported this week, seems a little farfetched. It already seems clear that Juve won’t be alone in their efforts to sign Felix as a result of the aforementioned interest from Manchester City, Paris Saint-Germain and Real Madrid, but Atletico Madrid may also provide competition if Antoine Griezmann moves on.

Griezmann has been linked with an exit from Wanda Metropolitano after it was reported earlier this year that he regrets his decision to stay with the club last summer, with AS carrying a report that Atletico will look to Felix to replace the World Cup winning Frenchman.

Whoever makes the offers for Felix, Benfica will try their best to resist and keep the starlet, with club president Luís Filipe Vieira insisting he will do everything he can to stop players leaving. “We are going to do everything so that no one leaves, I can say that no one will leave,” Vieira is quoted as saying by A Bola.

“We have a certain strategy and it would not make sense to be changing. I am the mentor of this project and I am going to beat myself to the last so nobody leaves.”

?It’s been a tough year for 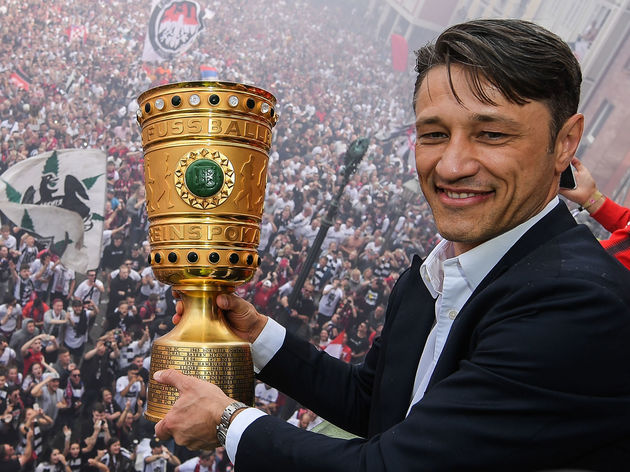 Unpopular opinion: I think we should keep Niko Kovac and give him a chance In his first full season in charge, the Eagles registered a solid mid-table finish, but it was their run in the DFB-Pokal which was the most impressive, only coming unstuck in the final against Borussia Dortmund.

Another impressive summer followed, as Ante Jesús Vallejo, Marius Wolf and Omar Mascarell arrived, while only (with the benefit of hindsight at least) Luca Waldschmidt’s exit has come back to bite them on the backside.

Unpopular opinion: I think we should keep Niko Kovac and give him a chance ?With the end of the season rapidly approaching, that means the life cycle of FIFA 19 is also nearing its end. Out with the old, and in with the new, as FIFA 20 will be just around the corner.

The game will come with some serious player rating changes, since there have been countless players around the world who have played out of their skins this year. One of the standout performers in Portuguese football this season, Eder Militao earned himself a €50m move to ?Real Madrid, and he’ll earn himself a nice upgrade on FIFA 20 in the process.

He began the current game as a 75 overall, but was bumped up to 79 following an impressive start to the season. The 21-year-old’s form has not wavered, so expect that to upgrade to rise even higher.

He may not reach the heights of his 89-rated Future Stars card just yet, but he’s certainly on the right track.? The 20-year-old has well over 50 ?Premier League appearances to his name, and has been linked with a blockbuster move to the likes of ?Manchester United and Real Madrid. That sounds pretty deserving of an upgrade.

?He picked up a 77-rated in-form card in Team of the Week 18, which sounds more like it. However, don’t be surprised if that rating goes up a little further next season. Before this season, few around Europe had heard of Krzysztof Piatek, and his 70-rated silver card is evidence of that. But those days are long gone.

The 23-year-old is well in the race for the ?Serie A top goalscorer award this season, having showcased blistering form for both Genoa and ?AC Milan. Piatek has been one of Europe’s deadliest forwards this season, and that will be rewarded in FIFA 20.

He was bumped up to a 76 overall in the winter upgrades, and picked up an 82-rated special card shortly after. That’s the kind of level he should be at, so expect to see Piatek there, or thereabouts, next year. ? There’s a reason the likes of United, ?Bayern Munich and ?Manchester City want him – he’s really good. He went from a 70 overall to a non-rare 76 in winter, but that still does not do him justice.

A big move away from the Eagles would certainly prompt a rating increase, but Wan-Bissaka deserves one regardless. Somehow, ?Bournemouth’s David Brooks did not even pick up a winter upgrade, meaning he remains just? 69 overall. How?

The young Welshman has racked up plenty of goals and assists for his side this year and has established himself as one of Bournemouth’s most important players. Whether on the wing or as a central midfielder, Brooks knows how to pull the strings for his team.

Is a gold card too much to ask? That’s all we want. Eintracht Frankfurt wonderkid Luka Jovic has picked up so many special cards this year that we’re beginning to lose count, but he began the game with a rating of just 75.

That was quickly boosted to 80 in winter, but Jovic has not slowed down. He’s scored goals, goals and more goals, and has been hotly tipped to make an astronomical switch to either Real Madrid or ?Barcelona.

He’s up to an 88 overall now, and his Team of the Season card will be even higher, so expect another bump up for Jovic next year.? At the start of the season, ?Borussia Dortmund starlet Jadon Sancho ?was one of Europe’s hottest prospects, but that’s not the case anymore. He’s now one of the ?Bundesliga’s finest wingers, and his rating next year will definitely reflect that.

He started off as a 72, but jumped to 78 after a blistering start to the season. He has since made his debut for England, and continues to try push his side towards a league title.

With double-figures in both goals and assists this season, Sancho needs a rating to reflect his skill level. There was a time this season when 22-year-old Sergio Reguilon was one of the shining lights in Real Madrid’s disappointing season. Yet somehow, he is still 64 overall. 64.

He may have lost his place in the starting lineup to ?Marcelo since Zinedine Zidane’s return, but the Spaniard had plenty of time to show the world what he is about. He can hang with the best, and will surely receive one of the biggest boosts on the game for next year.

Don’t expect him to share a similar rating to Marcelo, but he has to become a useful option for any ?La Liga side. It seems hard to remember a time where Nicolas Pepe was not one of the most talked-about wingers in world football. He began this season just 75 overall, but things quickly escalated.

His base card jumped up to 79, but his latest special card now leaves him 89 overall, and that’s before his Team of the Season card comes out. The 23-year-old won’t retain that rating next year, but he’ll definitely land somewhere in the middle.

But where will he be playing? ?Chelsea, Bayern Munich, ?Arsenal or somewhere else? He could be one of the biggest transfers of the summer, and that will do wonders for his rating.?

Norwich manager Daniel Farke will be given a modest £20m transfer budget this summer as the Norfolk based club look to avoid the trend of reckless spending highlighted by Fulham’s £100m spree last year.

The Canaries continue to lead the way in the Sky Bet Championship, and are on the verge of automatic promotion to the Premier League after a remarkable season thus far. Despite sanctioning the big-money sale of star midfielder James Maddison to Leicester last summer, Farke has spent very little since taking over the helm at Carrow Road in 2017, notably bringing in Championship Player of the Season Teemu Pukki on a free transfer from Brondby and midfield sensation Emiliano Buendia for just £1.5m.

Fulham, meanwhile, spent over £100m after going through the 2018 Championship play-offs and Wolves have broken their transfer record twice this season with the signings of Adama Traore and Raul Jiminez.

It appears, however, as if the German manager will need to discover further value signings in the summer, with the Daily Mail claiming that the Canaries board will provide a budget of around £20m should they clinch promotion to the Premier League .

Norwich do not wish to risk financial jeopardy by over-reaching and believe that their current talent-pool is sufficient, along with Farke’s tactical prowess, to offer the best chance of survival.

Their current players will share a bonus prize pool of £10m once their place in the top flight is sealed and will have automatic wage rises, with certain stars more than doubling their money.

? With two games to go and a superior goal difference to third place, Norwich City are all but back in the Premier League.

As it stands, Farke’s side are six points clear of Leeds in third with a superior goal difference, therefore, the Canaries need only a draw from their home tie against Blackburn on Saturday night to confirm promotion.