Paris Saint-Germain coach Carlo Ancelotti has expressed his approval over a transfer of David Beckham to Ligue 1 side Monaco.

The Los Angeles Galaxy star had recently been linked with a number of clubs in Europe, and Monaco are believed to be one of the strongest contenders for the 37-year-old’s signature.

The Italian tactician, who had previously ruled out signing the player for Les Parisiens, believes that having the midfielder move to Ligue 1 could do great things for the image of French football.

“[Beckham coming to Monaco would be] very good for the image of France,” the 53-year-old told L’Equipe.

The coach had the opportunity to work with the star during his eight years at Milan, where Beckham enjoyed two loan spells in 2009 and 2010, and Ancelotti went on to praise the midfielder for being “one of the most professional players and serious [players] that [he] had.”

The former England captain, however, has claimed that the first time he heard about the link with Monaco was when a friend asked him about it on his way to training, as Goal.com reported on Thursday.

Beckham has appeared 117 times for his country during his career, scoring 17 goals.

Andre Villas-Boas has blasted former Tottenham midfielder Luka Modric after the Croatian called on ex-team-mate Gareth Bale to join him to Real Madrid.

The 27-year-old revealed that he had spoken to Bale about his desire to one day win the Champions League, and insisted the Welshman’s presence at the Bernabeu would make Los Blancos “unstoppable”.

Modric’s comments prompted a response from Villas-Boas on Friday, with the Portuguese insisting the ex-Spurs man should focus on his commitments in La Liga instead of Bale’s future at White Hart Lane.

The 35-year-old said: “I think Modric should focus more on his club than ours.

“He has to worry about Real’s game against Atletico Madrid and about getting in to the quarter-finals of the Champions League.

“Obviously Modric is aware of Gareth’s performances because of his love for Tottenham and the fact that he is very connected with him and this football club, but it’s completely impossible.”

The January transfer window has long been treated with sniffy detachment by some of the big Premier League clubs.

The likes of Manchester United and Arsenal, with established management structures in place, have generally regarded the winter opening as useful for minor squad surgery but tend to leave the major operations for the summer.

Not this time. At least, not for cash-rich Arsenal, who might not be in the title running but face a ding-dong battle with Tottenham, and possibly Everton, for a top-four finish.

For the last four or five windows, Arsenal have created funds by offloading their most valuable assets, but Wenger has responded by dousing the flames from the money burning a hole in his pocket.

That situation is about to change. Speaking to French television station Bein Sport, the Frenchman offered the tantalising possibility to Arsenal supporters weary of the cautiousness of their manager in the transfer market that there will be significant reinforcements arriving in the January window.

“’This winter we will work very hard because we have some funds available,” Wenger said. “It could happen that we buy two players, but I cannot reveal the names.”

Those transfer funds are variously estimated to amount to a war chest of between €43 million and €61m in the forthcoming window – a considerable sum for a club that always figures low down on the list of the league’s big spenders on fees, if not wages.

Not since January 2006, when Arsenal responded to a poor start to the season in the wake of Patrick Vieira’s departure by signing Emmanuel Adebayor, Abou Diaby and Theo Walcott is there likely to be such an influx of new blood.

Goal.com first revealed last Tuesday that the Arsenal manager is also weighing up the possibility of bringing Thierry Henry back to the club for a third spell in January, on loan from New York Red Bulls.

Wenger has made no attempt to hide his continuing admiration for the club’s record goalscorer, even in his mid-30s.

“A loan [for Henry] is still a possibility, but we will still try to strengthen for the long term,” he told reporters.

“Henry is the talent that you dream to have. He has fantastic physique, fantastic technique, a fantastic brain, all built together in one man. At the start he was not confident enough but he has gone on to show what a great player he is.”

Wenger has established a reputation for being an outstanding development manager, who makes stars rather than buys them.

But there was a major shift last summer in the age profile of the squad, with Lukas Podolski, Olivier Giroud and Santi Cazorla all arriving at Emirates Stadium well into their 20s and with proven track records at club and international level.

This trend of buying ready-made talent is likely to continue. Wenger and his staff have identified the goalkeeper, attacking midfield and centre-forward positions as the key areas to strengthen in the forthcoming window.

Although Walcott’s uncertain future adds a fluid element to the forward planning, in both senses, the pursuit of Crystal Palace sensation Wilfried Zaha is not believed to be directly linked to the Arsenal man’s situation.

Andrey Arshavin is expected to be offloaded in January, with Fulham and Zenit St Petersburg leading the chase, while Gervinho could be unavailable for up to six weeks on African Cup of Nations duty.

With forward flop Marouane Chamakh also heading for the exit door, there promises to be a major shake-up of the senior attacking positions.

Despite Palace co-chairman Steve Parish and manager Ian Holloway both saying this week that Zaha will not be sold before the end of the season, Arsenal are increasingly confident of landing Zaha in January and talks to sign him in a deal worth €14.8m have already begun.

There is confidence at Emirates Stadium that Walcott will sign the five-year deal that has been on the table since late August.

The England international has been promised opportunities to play up front by Wenger if he stays, and this could have an impact on whether Arsenal recruit Henry or principal centre-forward target Adrian Lopez – or both.

Klaas-Jan Huntelaar has been strongly linked with the Gunners, but Goal.com understands that Atletico Madrid’s Adrian is the No.1 striker January target.

Wenger has intensified his interest in the 24-year-old Spain international after failing in a bid to capture him in the summer, although the club’s hope of activating the forward’s €18m release clause in the forward’s contract could be affected by Chelsea’s pursuit of his colleague Radamel Falcao.

Several permutations are possible but, for once, Emirates Stadium promises to be a hive of activity in January.

QPR manager Harry Redknapp says that Liverpool midfielder Joe Cole is still a “top player”, but insists he has not made any enquiries about bringing him to Loftus Road just yet.

Cole worked under Redknapp at former team West Ham, and the new chief in west London has admitted that he still thinks the player is talented despite a disappointing time at Anfield.

“I like Joe, I had him as an 11-year-old,” Redknapp told reporters.

The QPR boss has also been linked with Marseille striker Loic Remy, who was close to joining Tottenham during Redknapp’s reign at White Hart Lane.

But despite the speculation, the 65-year-old has reiterated that the side’s current objectives are to turn performances around, as they look to get off the foot of the table.

He added: “I was interested in Remy but that was then. It’s a different situation now. He would be expensive. It depends on where we are in January.

“I’ve never discussed players with anyone. Here we are, we need to win matches now. January is way off.”

Crystal Palace manager Ian Holloway has come out fighting after Arsene Wenger confirmed that Arsenal are mulling over a move for starlet Wilfried Zaha.

Following the Frenchman’s comments, the former Blackpool boss lashed out at the north London outfit’s manager for talking about his players in public, telling The Sun he would be ringing the Gunners’ manager to complain about his “totally bad etiquette”.

However, as exclusively revealed by Goal.com, the Gunners are now in talks with the Championship outfit about a proposed £12 million January move for the 20-year-old.

But this is unlikely to stop Holloway from doing all he can to keep hold of the attacker, who recently won his first senior England call-up, even if it means getting in Wenger’s way. 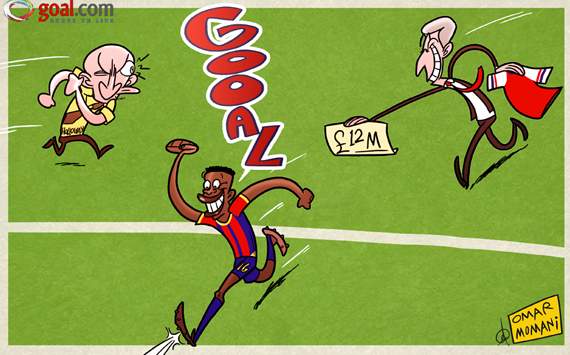