Real Madrid striker Karim Benzema has dismissed speculation linking him with a move to Paris Saint-Germain.

The France international acknowledged the quality of players that PSG have been signing in the past couple of years has been high, but believes the Ligue 1 side still have some way to go before they enter the world elite.

“For now, I am at Real and I do not want to leave,” he said to TF1‘s Telefoot, when asked about the PSG rumours. “Paris invests in very good players like Thiago Silva and [Zlatan] Ibrahimovic. But it takes time.

“They must first win the championship and they reach the last 16 of the Champions League to achieve the same level of the big clubs.”

Benzema also played down any personal unrest over Gonzalo Higuain being favoured by Los Blancos boss Jose Mourinho up front this season.

“It is true that I have less playing time than last year,” the 24-year-old continued. “But I am someone who battles, and that’s from the beginning of my career. I will continue like this with the aim of playing more and scoring more.

“There was no discussion with Mourinho. I respect his choice [to play Higuain more]. When he calls me, I try to be decisive.

“I can finish my career at Real – if it’s possible, we’ll see. For now, I feel very comfortable here.”

Benzema believes the French public and media should not slate France team-mate Samir Nasri so heavily and admitted the idea of captaining his country is alluring.

“Criticism is part of football. Sometimes it is more than unfair, I think. [In regards to] Nasri, we must leave him alone. We must give him our trust. I think he can still give good things to the Bleus. Because he has the ability.

“Captain of the French team? That’s a lot of responsibility, but I’m ready. But I do not make the call, but if the coach asked me, I’d say yes.”

Robert Pires has sensationally claimed Ashley Cole “might say yes” to a move to Paris Saint-Germain as the Chelsea and England left-back looks to resolve his future.

Pires, a former team-mate of Cole’s during their time together at Arsenal, has suggested the 31-year-old is attracted by the project at PSG and is aware that his reputation could draw a lucrative deal from the Qatar-owned French club.

Cole has just seven months remaining on his current contract at Stamford Bridge and, as yet, has failed to negotiate a new deal with the European champions. The full-back has also been at the centre of controversy this season, receiving a £90,000 fine from the FA after the now-infamous “#BUNCHOFT***S” tweet that followed the governing body’s decision to punish John Terry in the wake of racism allegations.

But Pires insists it is the complete package that would tempt Cole to move to the French capital, telling Le 10 Sport: “Paris may be of interest for him to all levels – sportingly, financially… It’s Paris, it’s France… I think he might say yes.

“The project of PSG attracts him. I know him well, I’m sure that he is interested. PSG will become one of the biggest clubs in Europe in the coming years, they are trying to get something strong, and he knows it can encourage him to come. There will be a great team and financially it can make a big deal.”

Cole is widely recognised as one of the game’s greatest defenders and his trophy cabinet matches such a reputation. He holds a record seven FA Cup winner’s medals, as well as three Premier League titles and one League Cup winner’s medal – then last year’s remarkable run to Champions League glory added the most coveted club honour to his impressive haul.

But Pires feels that although Cole may be interested in competing for foreign honours, ultimately it will be the financial package that convinces him to move to PSG.

The Frenchman added: “He played in two huge, biggest clubs in England, he won everything. He sees that the PSG is interested in him, he knows that what he [can] get financially at Chelsea, he could have it in Paris. This will attract him, it is obvious.”

PSG currently sit atop Ligue 1 with 22 points from their opening 11 games, and are just two points away from ensuring qualification for the Champions League knockout stages. Manager Carlo Ancelotti is aware of Cole’s talent first-hand after managing the Blues for two seasons and claiming the double of Premier League and FA Cup in 2009-10.

Botafogo president Mauricio Assumpcao has confirmed that the club have rejected a €4.5 million offer from Juventus for young defender Doria.

The 18-year-old has made 17 appearances in the Brasileiro this season, scoring one goal, and the Fogao chief believes his side can demand a higher transfer fee.

“But I don’t know – the transfer market is crazy. There are players out there being sold for €100m.”

The midfielder arrived at Stamford Bridge in the summer for a reported for of €8 million, but has only been afforded 20 minutes of match action for his new club, coming in the Capital One Cup.

Marin began his professional career with Gladbach, winning the 2. Bundesliga in the 2007-08 campaign before rising to prominence with Werder Bremen, and Favre has hinted at a move to bring the former player back to Borussia Park.

“I don’t want to comment on this. We’ll see in winter,” Lavre told Bild.

The 23-year old was an integral part of the Bremen squad, and will be eager for increased first-team exposure, but whether a move away from Stamford Bridge is an attraction of Marin remains to be seen. 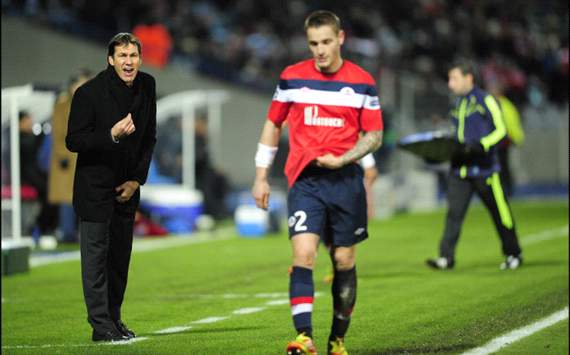 Lille defender Mathieu Debuchy has conceded that he was deeply dissappointed when his club refused to let him transfer to Newcastle over the summer and admits that it was difficult to deal with the Ligue 1 team’s decision.


The 27-year-old right-back, however, said that this dark episode is past him now and that he is fully concetrated on giving everything for Les Dogues.

“I could not go to Newcastle because the president of Lille did not want me to go,” Debuchy told L’equipe.

“At times it was a decision that was difficult to deal with over the summer and, yes, I was disappointed.

“I hope there will be other opportunities, but for now that is all in the past. I will give 200 per cent for Lille and I have never said I am unhappy here. I am not sure what my future will be after this season though.”

Newcastle were not the only party interested in Debuchy’s services. It was rumoured that Inter, Chelsea and Real Madrid were also pursuing the right-back’s signature.